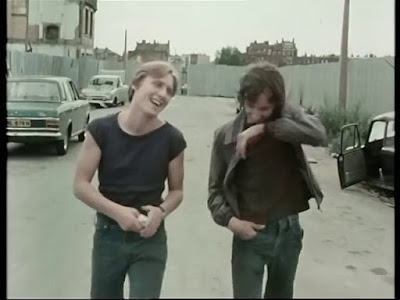 Writing these posts keeps reminding me that television was treated very much as if it was a new medium, even as late as the 1970s. What I mean is this: the majority of show formats were inspired by previous formats, for example cinema (films), radio (chat shows and serials) and theatre (plays). When I think of formats new to TV I'm ashamed to say that all I can think of is TV shopping, and reality TV. Strange it should have become so dominant when it's so derivative, and I would argue that services like Netflix are more like watching YouTube videos so derive from an internet-initiated medium.

That said, happy to be outdated and derivative, we have yet another of the 1970s anthology series of plays. ITV Playhouse actually overlapped into the sixties and into the eighties and is literally legendary. If you're reading this you have definitely seen something in the series. Some are even available in DVD box sets based on the playwright. I have been unable conclusively to find its archive status however would put money on it not being complete. There is also the usual confusion because sometimes this show is just called Playhouse, and if you look at this episode on YouTube you will find it attributed  on one version, and even on the time thing on the other version, to Plays for Britain. But I don't think it's the show on the IMDb page I've linked because it's not listed there and isn't on the commercial box set of that show. This one looks like a lucky find: on the IMDb page for it there are older reviews (some even from cast and crew) wishing they could see it again and then someone comments that they've come across a recording of it!

Having finally arrived at the subject of the post I'm not going to do too much description, although there isn't too much online. I don't often say this but your life will literally be better if you close this page and watch it on YouTube instead. This is some superlative TV, and I see it won a BAFTA.

Okay I'll carry on with giving my impressions as is my wont. One of the reasons this show is difficult to describe is if you say, correctly, that it's a play about car thieves, you don't give the correct impression. What this really is, is a coming of age play, but it's not one of those pretentious ones that is all about coming of age because it's about two young car thieves who are at a tricky age. They've left school and haven't yet found their way into work, so mess about stealing cars. They're good at this so they get involved with a professional gang. The play manages exactly to reproduce the feeling of that time of life, which is both a dream because you have so many opportunities and haven't yet messed them up, and can also be a nightmare because it's actually quite stressful being adolescent anyway. 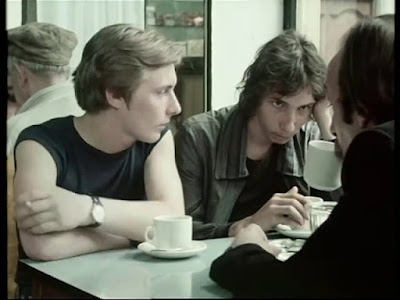 The show is also a definite portrait of a time and place, namely London in the seventies. We're in the setting of The Professionals, The Sweeney, and Target, without the police brutality. It's also the summers in the middle of the seventies. Despite this being about car thieves it manages to miss virtually all the grittiness of 'realistic' seventies TV and capture the magic. Seriously to set a show in the seventies and manage not to have a strike, riot, murder, police brutality, etc, is quite an achievement in itself.

There is a lot of detail given about how to run a car stealing business in the seventies and it's absolutely fascinating. There is a respectable boss behind the scenes but most of the people we see actually run it. I am obviously too law abiding but I learned two important life lessons from this show and the first was you get a log book before you steal the car. I would never have thought of that! Then they get the car to match the log book and there's a team behind the scenes if it needs respraying. I love the scene where Richard Beckinsale has a fake letter to say he's repossessing the car he's stealing!

And the cars, my god the cars. Not most of the cars they steal or the ones that get crashed, they're rubbish. But the cars in the background, it's like a junkyard of seventies cars before they got junked. At one point they steal a Datsun Cherry and I really liked those. I thought they were very stylish among the crowd of Cortinas.

In probably the most spectacular veering off the subject I have ever managed I am just going to talk about a supermarket which appears because cars are stolen from its carpark. It's Wilco, which will be familiar as part of Woolworths on both sides of the pond. I think the one is the one in Hatfield, which has now been demolished. I see there are shops in Australia and South Africa called Woolworths which aren't connected to the fondly remembered UK/USA business. It's very strange, to my eyes, that the shop's logo is as prominent as it is, and appears several times. I wonder whether it was product placement of a sort which would have been unusual here at the time. 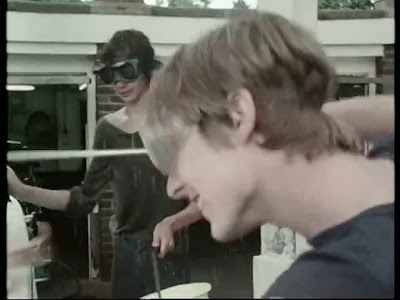 I suppose I'd better have a go at being critical since this pretends to be a sensible blog. I feel rather bad and cannot stress enough that this show seems to be universally loved by everyone who comes into contact with it, because my only criticism is a bit major. It's way too ambitious, too layered and after drawing you in, the ending feels a bit inconclusive. This script is one which really could have been a film, if there was ever a TV script you could say that of. If this had been a film it would have had space to develop the complexities of the many characters and the business. It would also have been a great classic coming of age film, instead of being stuck on YouTube and blogged about by men who wander the depths of the internet for odd episodes of lost TV shows. We're talking definite BFI release here. I literally cannot praise it highly enough, except for the limitations of its medium.

If you haven't given up and gone and watched it yet, please do so.

Oh - I never mentioned the second life lesson I got from it, which is that it's difficult to run in flares.