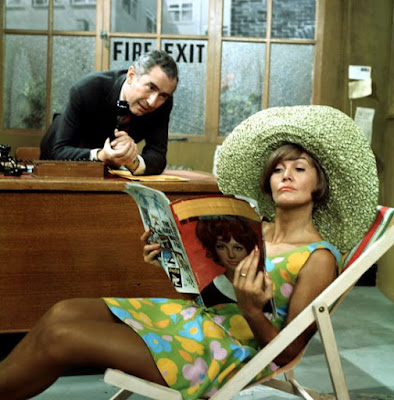 This is the first episode of the late sixties and early seventies sitcom Mr Digby Darling, about an executive in a rat control business and his secretary. I am honestly mystified that I had never heard of it until I came across it while researching these shows; it was hugely popular at the time and was I believe the fourth most viewed TV show at one point.

The show's almost complete absence in the cult TV world (after all, there are endless old TV shows and yet ones which aren't as good as this get talked about ad nauseam) is absolutely bizarre. It has two wildly popular actors starring (Sheila Hancock and Peter Jones), who had previously been in the successful The Rag Trade, which has had a commercial release. Really odd.

Anyway, that means I don't have anyone else's opinions to disagree with so you get my own untested views. I can see why this show was so successful. It is essentially a sitcom about a rather hopeless executive, very much in the same stable as many another sitcom at the time.

This episode is about the effect of an efficiency expert coming into the firm. Let's just say efficiency isn't their forte and the result is exactly what you'd expect. I feel a bit bad because this will sound like damning praise it's not exactly scintillating but definitely no worse than, say, The Liver Birds.

Unfortunately I have only seen this episode so can't generalise, in fact I'm only guessing, but if this one is representative it may have the same defect as one of the less popular Carry On films, Carry On At Your Convenience. It's the one set in a sanitary wear factory where much of the plot revolves around industrial relations. Notwithstanding the wild popularity at the time of Mr Digby Darling which was not shared by the Carry On, I wonder if the world of work of the time was too depressing to be entertaining as the years go on? Of course this would not explain why The Rag Trade is relatively popular.

Anyway if you want to watch it there are two episodes roaming wild online. 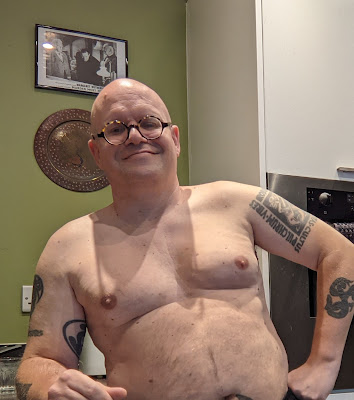 As you can see I have a new profile picture, this time taken in my home environment rather than in the wild. Luckily bare chest weather has arrived at last!