Orphaned Episodes: Give Me A Ring Sometime (Go Girl)

Today a programme that I'm very sorry indeed has been wiped. Hell, it's not only wiped, it was never even broadcast in the first place, for reasons unknown (edit: I have also read that the full series was not made because finance couldn't be found), and one full series was made. It is only online because the pilot has been uploaded to YouTube by a fan of one of the actresses, Françoise Pascal. It's reportedly also commercially available as an extra on the UK DVD of exploitation short Take an Easy Ride, but meets my definition of orphaned episodes because the rest of the series is lost. Director Kenneth Rowles was also behind the sex comedy The Ups and Downs of a Handyman, and probably saying that should indicate we're in some serious seventies territory here, so crack open the fondue and defrost the Black Forest gateau before reading the rest of this.

Not to beat about the bush, the reason I'm so sorry this series has been wiped is that it's insane and it's like mainlining Essence of the Seventies.

Go Girl was a thirteen part series from the early seventies about a crime-fighting Go-Go dancer (no really).  The show was beset by financial problems and never made it to air. Most of it was then wiped, with only the pilot episode now known to exist (this did eventually surface on VHS a decade after it was made and is currently available as a bonus feature on the UK DVD of Take An Easy Ride).

Luan Peters is the eponymous go girl, Carol.  Probably best known for playing an attractive New Zealand guest in Fawlty Towers, it’s obvious to see why Peters was cast – she’s perfect eye candy, capable of go-go dancing at the drop of a hat (and able to look remarkably cute in a bikini too).

It’s hard to work out whether Go Girl is a comedy, drama or something inbetween. Source

There must be something wrong with me because despite being a fan of old TV (and even writing a blog about it) what Luan Peters is best known to me personally for is being in The Flesh and Blood Show (1972) - a film I like very much indeed. While reading round (I won't dignify what I do with the title research) for this post I have also discovered her in the doubtful sex comedy Not Tonight, Darling (1971) - doubtful because there isn't another sex comedy evoking less enjoyment than that. Anyway her many other roles in TV seem to have bypassed me completely although I must have seen many of them.

I am delighted to say that there is an excellent (and hilarious) summary of the plot of Give Me A Ring Sometime here, it's a bit awkward when I have to tell you what's going on in these orphaned shows because nobody else has. Praise and criticism is far more my forte.

Since I'm free of any necessity to explain this ITC on acid show to you, I'm going to list a few of the things which make this show so quintessentially seventies, since this approach seems to work quite well. It was shot on location in Spain so has the authentic 'continental' feel. The smoking in the opening scene. My God, the smoking. You could contract COPD just watching this show. The animated titles are great fun and very reminiscent of Charlie's Angels and Tales of the Unexpected, except where they cut to tarot cards, the Go Girl titles cut to signs indicative of red light districts and to ITC-type scenes of seventies luxury. Actually animation is used elsewhere in this episode as a useful way of cutting from one scene to another without excessive explanation - I honestly think this would have been quality TV. The font used in the titles is the one used by The Goodies. The music is quite something - the opening scene after the titles is accompanied by Slade's Coz I Love You. The baddie bears more than a passing resemblance to Ron Jeremy. At one point there is a monkey in the dressing room (there was a fad for exotic pets in the sixties). The clothes would all without exception be sold for a fortune by vintage dealers now (but would be too small for people fifty years later). 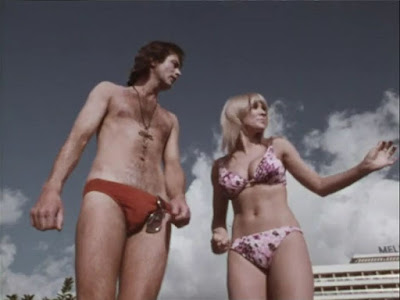 Damnit I suppose you want me to be vaguely critical instead of just raving about this show before bursting into tears because it's been wiped. The obvious criticism is that it genuinely doesn't know what it is - there are slapstick elements during a fight scene which seem honestly out of place. To be frank, even as I say that I immediately think of fight scenes in the original Scooby Doo series and am of the opinion this show is out of the same stable. In common with every ITC series this isn't a straightforward detection show but includes atmospheric and cultural stuff as well. I am grateful to my exploration of these shows for introducing me to the concept of aspirational television, which I think this show is. This was of course also the era of the Hardy Boys mysteries, which often stopped for a song.

Because who would expect a crime investigating go go girl to turn into Miss Marple. Move over Poirot, make way for those pesky kids! It's slightly unfair to guess what would have happened to this show if it had survived because of only having the pilot to go by, but I would think that if it carried on like this it may have become a classic of kitsch seventies TV. It may even have knocked the enormity of Jason King off its throne!

This is stonking good television and I'm genuinely sad it's been wiped. I love it!