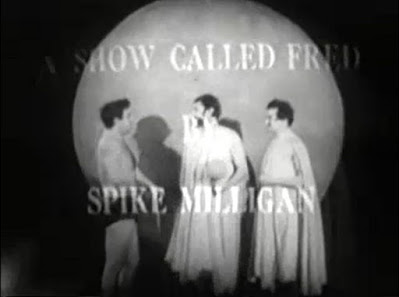 I think everyone reading this must be aware of the legendary 1950s radio show The Goon Show? It is literally famous and well known for its great creativity and innovation in its humour, often seen as a precursor of the humour of the Pythons and others. And I'm afraid to say I don't like it. Talk about antisocial. It actually took me a long time to work out why and it is the totally idiosyncratic reason that Harry Secombe's voice goes through me. God it looks even more ridiculous written down than it does in the privacy of my own head, where my funny little ways are given free rein. Anyway, I would love the humour, but just can't listen to The Goon Show. For that reason I am delighted that the other members of the Goons went on to do this TV show, because it is basically the same humour. I am equally gutted that as far as I can tell this is the only episode extant.

It is another show largely reflective of TV of the time and I am delighted that one of the sketches is called Ying Tong Tonight and so this blog post has to have an official soundtrack:

I honestly think the show might have been more sophisticated than its audience were prepared for and certainly current critical opinion is wildly divided. It was a show which did not draw on the music hall and theatre tradition that informed much of the contemporary television and probably informed much of the audience's opinion:

A Show Called Fred provoked strong reactions upon broadcast for its unusual content. The People reported that the show had received more telephone complaints than any other ITV show for being difficult to understand. Reviewing the programme in the Daily Mirror, Clifford Davis described it as "the most meaningless, weird, un-funny piffle ever to have been perpetrated on TV". In other quarters, the show garnered critical acclaim. Kenneth Baily of The People described it as "a new approach to TV fun" and "just as original as the Goons and radio's inimitable It's That Man Again". Writing for Truth, Denis Thomas singled out the show from any other comedy show on television, describing it as "so televisually funny: this, for once, is a variety programme which owes nothing at all to gramophone records or to the Palladium, or even to cabaret". Thomas's comments were echoed by Truth's Bernard Levin, who noted that the show had been "hailed in many quarters as not only the funniest thing that has ever been seen on television, but as the first programmes to exploit the full resources of the newest medium in a manner which owes nothing to the methods of any older one". Source

I don't have a criticism. There are a few copies in different places on the internet which have the same faults so must come from the same original source. The Wikipedia page above says that the show is available on the BFI website but when you click on the link it is listed as unavailable. We're in real orphan episode territory here because it is as far as I can see completely unrestored. The screen grab above of Peter Sellers being the Rank gong man is a good indicator of the picture quality (and you know what I'm going to say - how much hair can one man carry?!).

If you like the humour of The Goon Show there was a TV show called The Idiot Weekly Price 2d, one called Son of Fred, a children's show using puppets called Telegoons, a TV show called Tales of Men's Shirts and another show called The Last Goon Show of All. The last two are basically the radio show being performed on TV, and dribs and drabs of these are knocking around online.

This gets my accolade of stonking good television.