Orphaned Episodes: Episode 4 (There's a Lot of It About) 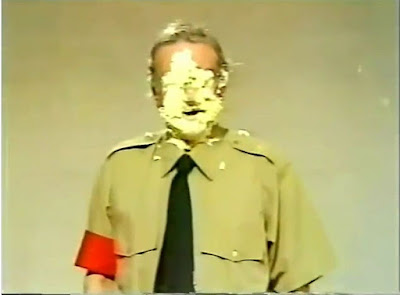 Confusion has become the signature feeling associated with orphan TV episodes for me. Apparently There's a Lot of It About is not the final series of Spike Milligan's seminal series with the confusing name of Q with a numeral for the series. Which doesn't start at number one. And which I have merely touched on here before although I'm delighted to see I called the post Spike Milligan, Boobs and Custard Pies. This is not that series but has the same theme music. You know what has the same theme music as one TV series? Only that series. This one also has some of the same sketches, including the idiot scouts.

I see there is a show titled in the titles Q Spike Milligan (without a numeral) on YouTube which the uploader has called Q1 and is described in the comments as the pilot for the show. It isn't on Simply Media's box set of Q which claims to have all the surviving episodes, and IMDb makes no mention of a pilot so who knows.

It also doesn't help that There's a Lot of It About has had one full run of every episode followed by a shortened run of the series chopped up and reduced to three episodes. You can find those three on the internet, but this is about one full episode of the original series which you can find here. Anyway, everything up to this point of this post is purely to show why this show was almost guaranteed to be orphaned and also to make you as confused as me, because probably this post is best read with your head going round in circles too.

It's not every comedy show which starts with the announcement of the death of the star and announces a completely different show at request of the trustee of his estate, Miss Glenda Plunge of the Latex Dungeon, Soho.

I think you could say the humour is bang up my rather puerile street.

As is the case with a lot of Milligan's TV some of it hasn't worn well, however - blackface in particular is deeply problematic and Irish jokes just aren't funny. Some of the humour is of course perennial and a pie in the face for Adolf Hitler has never been wrong. Other aspects are jokes which still work although a surprising amount of this show refers to the now defunct Greater London Council - I for one am particularly amused that it would have a Marital Row department with detector vans!

On a more serious note Milligan actually covers much of the same material also being covered at this time by the upcoming alternative comedians (inflation, rising unemployment and the Thatcher government) and it is very interesting to see his different approach. That said his social commentary is clearly in a tradition which the alternative comedy scene inherited, of social commentary. I suspect, given the working class background of many comedians and the long tradition of them doing the stand up circuit, this indicates a rich vein of humour coming out of working class communities and such things as the trade union movement and the Labour Party (before it became the conservative party as well as the other conservative party and they just swap seats in parliament now and then).

I wasn't expecting this show to open up this train of thought, but quality television is always a door to other thoughts and worlds. There are also segments about TV programming so the humour is on a number of different levels including a thoroughly metafictional one.

My favourite bit is the bit where Mrs Thatcher asks what is coming next in the ongoing slaughter by Shih tzu dogs. Terrifying.

So in summary, a complex show made by a genius, which can be mistaken for the sort of slapstick which appeals to yours truly and suffers because of its confusing continuity with the previous series and confusing preservation. It also suffers because quite a lot of the humour hasn't aged well and was probably not that acceptable at the time.