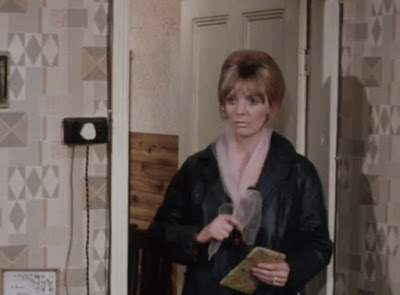 Second City Firsts (1973 to 1978) was a show produced by the BBC which featured a lot of writers' first time TV productions and was made at Pebble Mill right here in the Second City. 28 of the 53 plays survive and there are several on the internet.

Unusually for these shows this one has attracted quite a lot of comments online and I would point to here for an excellent overview of the series.

Early to Bed is dead gritty and set in a mining community much further north than here. It has an interesting use of visuals to contrast the traditional (the mine) with the then modern, in the shape of many of the decorations and furnishings we see in the terraced houses including, symbolically an electric fire. I am having some difficulty placing the affair which is the actual subject of this play in the contrast I have set up, because the young man seeing the neighbour is of course also part of the community. Perhaps the affair represents a betrayal of the community by a part of it.

This play excellently shows the reality of a working class community in the seventies before Thatcher's Britain decimated them. Probably vintage lovers would like the authentic seventies decor and clothing! A further symbolism is that Vinnie and his mother are Roman Catholics so much of the action in their house takes place with crucifixes and Sacred Hearts in the background.

If I have a criticism it is that Vinnie's (the protagonist's) intentions and what he doesn't communicate to others, is so confusing that this can be a bit difficult to follow. Of course it's possible that that was intentional and isn't helped by the audio being quite quiet on the copy I've been watching on YouTube.

Ultimately it is evident that Vinnie and his mother are going to leave the community to their devices. I don't want to spoil the ending but this is caused by his actions and also something that happens in the community.

Not for the first time I am marvelling that a programme aimed for viewing once with no possibility of domestic recording could be so intelligent and thought-provoking. Admittedly I have the attention span of a goldfish these days and tend to watch some very light entertainment indeed, but this is intelligent and requires attention. I am just not sure whether it's me or whether everything has been dumbed down since then.

Finally have the opening titles of a landmark show also made at Pebble Mill.