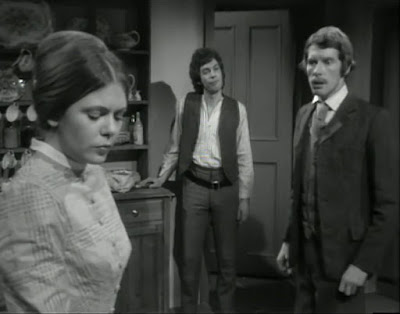 The introduction to this series of posts can be found here. I have added a tag of 'Orphaned Episodes' to a number of past posts about shows which fit my definition for being orphaned. I have done this rather arbitrarily because I have been surprised to find that The Avengers actually meets my definition of orphaned episodes, however it is very much an orphan which is loved and not shivering in the cold!

Very much out of my comfort zone with this one as it's several of the things I normally run from. It's much more high brow than I usually watch, being based on a story by Wilkie Collins. It's a period drama, which I tend to avoid and it's cast is chock full of stars. I may therefore be a bit jittery.

ITV Saturday Night Theatre (which is elsewhere called just Saturday Night Theatre and then became called Sunday Night Theatre for obvious reasons) was a very prestigious anthology series, showing plays by the greats performed by big name actors. The two shows ran between 1969 and 1974 although the dates vary a bit on the internet depending on whether you cut off at the change of day or not. The plays were also broadcast on different days by different ITV regions. Just to make the history even more confused there was also a long-running radio series of the same name which is also all over the internet. The Male of the Species trilogy of plays from this series are available as a commercial release however the rest of the series is more dicey: in fact The Cook and the Policeman was missing believed wiped until it was fortuitously found. You can see this episode here and it is probably the best and clearest of the shows in this series of posts, having clearly had a restoration.

A boarding house is always a sure fire situation for a drama, allowing for lots of characters and running up and down stairs. It also provides a perfect contemporary setting, since boarding houses of this sort don't exist any more. Set next to that the residents' insistence that the woman who found the body has confessed to the murder (we know she didn't do it from the start) and also the insights into the police, and you have a multi layered plot.

But there is something wrong. At any time in policing history, except in the case of a crime being reported by a prolific serial fantasizer, have the force sent a junior officer to a report of a murder to see whether it actually happened? No they haven't. This scene is preceded by a scene where the same junior officer is given menial tasks to do and I think there is a comment here on the attitude of the police. Lucky they're not corrupt, violent and never turn a blind eye to crime when it suits them nowadays isn't it? Although the story this is based on is called a detective story it is a very early one and actually contributed some techniques to the genre as we know it, including distracting from the actual murderer. Being an early one it more feels like a Victorian novel and doesn't compare that well to, say, an Agatha Christie. This makes this show interesting. My only real criticism is that the solution to the mystery is by means of a confession. In fact I'm left wondering whether an intention for this show was to point to the rampant incompetence of the police!

The programme then becomes a cross between a police procedural and an extended opportunity to show off the eccentric, devious and just plain mentally ill characters of the boarding house residents.

Some famous names in this, and some other faces that I thought I recognised but couldn't necessarily put a name to. Michael Crawford is always interesting in another role than Some Mothers Do Ave Em. My only criticism here would be the entirely unconvincing moustache he wears: clearly era appropriate, however it is somewhat wispy and I wonder whether it was applied to make him look younger than his age of 28 at this time. In fact the fact Crawford looks too old for the role would be my major criticism of this. In fact Tim Curry, who has a very interesting role, was younger and would have been better in the baby copper role.

The production is heavily studio bound and feels very solid and old fashioned in comparison to many other TV shows broadcast in 1970. It is very reminiscent of the way early TV was treated as if each show was a theatre play and feels quite stolid and worthy. I have seen some plays from the Armchair Theatre series, although not recently, and don't remember them being as lumpy and worthy as this. Perhaps I should say that I'm not criticizing, just describing, although of course this is quite different from the souffles I normally watch.

This show is an interesting example of an era of TV which has passed and largely not survived. It has been interesting to watch something so different from my normal viewing.