Orphaned Episodes: Diary of a Nobody (Six) and A Recommendation 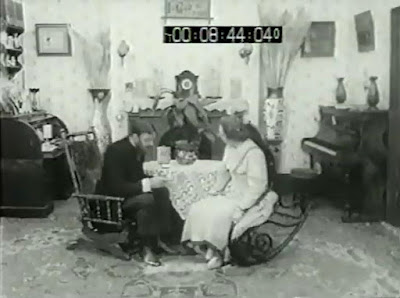 I am honestly delighted to have discovered this show was available on YouTube and also that it was TV, because it means I can share it here! I had seen pictures of this and thought it was a silent film of Diary of a Nobody (which I love) and am equally delighted that although you will read that this is a silent film, although the characters don't speak it is narrated throughout. I think silent films are at best difficult to watch - call me superficial but I like to be able to take my eyes off the screen now and then. Anyway, Diary doesn't look as if filmed in the sixties.

It was the first of a series of short films, lasting 30 to 60 minutes, made in the first year of BBC2, 1964. They were intended to be largely exercises in directors trying out their ideas, so they are not traditional dramas, not documentaries, and in fact are all incredibly oddball and high brow. They were also hemmed in at various points by different union agreements. If you would like an in-depth analysis you can find one here.

The fact that Diary is the work of Ken Russell indicates that we are immediately in the hands of a master and I have to say this is my favourite adaptation of Diary of a Nobody. The events of the book take place entirely in sets, filmed in black and white, and narrated with music as well.

The visuals are one of the excellent things about it. It is natural enough to aim for a Victorian look when creating sets for this but there is something ever so slightly surreal about the sets here. For example there is a scene in the hall of the house where the stairs just keep on going up and up, far higher than they would in reality. There is another shot where their friend brings a surreally long meerschaum pipe which pokes into Pooter's face. There are wonderful visual effects, such as when Pooter is describing how the house backs on to the railway line, you see the maid pegging out the laundry. At that moment a train goes by and we see the maid and the washing completely covered in soot... just as Pooter says the railway has given them no inconvenience beyond the cracking of the wall!

Although it is described as being in the style of a silent film there aren't caption cards describing what is happening like you get in a silent film. The titles, however, are completely as if they are the captions of a silent film. The story is narrated throughout by the actor who plays Pooter and I find you don't get bored of only hearing one voice. The scenes change quite quickly for a show shot in the sixties and depicting the Victorian era, and it remains interesting.

I have read that the set for this was specially constructed in a manner specific to silent films, although I'm damned if I can find out what this means. Their appearance to me looks much more like a theatre set. I see that many of the actors were associated with the Theatre Workshop group, a famous theatre group producing famous plays and actors, which further reinforces the show's origin as a series of films intended to showcase the director's ideas.

And it's a great success! I love the book anyway but I think this is the best adaptation and would highly recommend it. My only criticism is that it could do with a full restoration and release. I am going to be characteristically frank and say that I'm not at all sure I would like to see the other shows in this series (see the link above). As so often during this series of posts I am finding I am lurching from being distressed that things have been wiped to being surprised that shows have been kept! As always this view is entirely my own and not at all objective.

One of the wonderful things I have found online while researching these orphaned episodes posts is this YouTube channel. It consists solely of audio recordings of missing TV shows. There are all sorts of good things on there including missing episodes of Ace of Wands and episodes of the completely missing The Rat Catchers, which is a show I would really like to see. Of course it can be quite difficult to understand the audio of a TV show but beggars can't be choosers and we are all familiar with the way home audio recordings mean we have wiped Dr Who episodes and the South African Avengers radio series. Highly recommended.

Update: tell a lie, one episode of The Rat Catchers has been found.