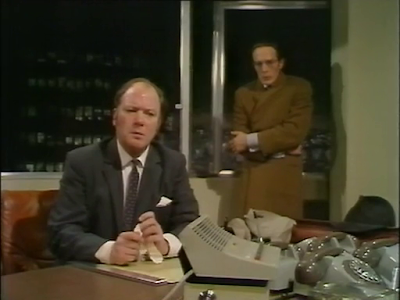 When I started this series I rounded up odd episodes of shows that I had come across and saved over a number of years. Many got ruled out but I'm delighted to say that unexpectedly, random episodes are leaping out at me and I have discovered a number of new shows while barely trying at all. This is one of them.

Tales of Unease was a  seven episode anthology series whose stories were adapted from a number of previously published anthologies and broadcast in 1970. Like most of these shows there isn't much on the internet but this one has the luxury of a summary of all its episodes which makes me want to see the whole thing, despite only having found two episodes actually available to view. There is a fascinating account of another episode here.

Calculated Nightmare is about what happens when a disgruntled employee turns a firm's technology against the directors who have decided to make him redundant. It starts with some background about life in the firm and details about how go-ahead the firm is. The episode is set completely in the office before moving into a locked vault and it cleverly and convincingly builds up the claustrophobia. While trying to avoid spoilers the end has a good twist when you think the locked room situation which has been set up is resolved.

There is a lot about the common fear at the time of mechanisation and technology, along with the time and motion studies and rationalisation of business which were also a cause of conflict. I like this juxtaposition because it complicates the usual fear of technology narrative and inclines the narrative to my own opinion that the technology isn't half as scary as the humans who tell it what to do. Fifty years later, even if your every movement is being monitored in an Amazon warehouse, the real problem is the humans that have set it up that way. There is much in this show of the morality of business and the morality of revenge. I think some people will consider the resolution of this show essentially immoral, however that just shows how this show prompts an ethical quandary.

The show is not looking bad although not to professional restoration standard. It is in the earthy tones palette of the early seventies.

I haven't watched the other episode in an attentive way yet, but this one makes me regret that the rest of the series isn't available.