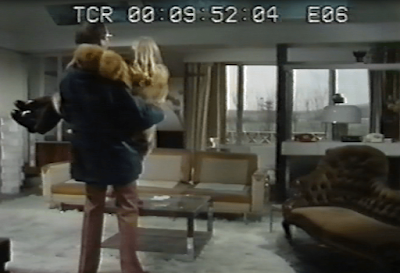 Another Saturday (or possibly Sunday) Night Theatre, but then I didn't give myself a condition of only dealing with one orphan from each children's home. Actually even if I had I would still do ADAM because it's excellent and has the hallmark of all good drama, that it has layers of meaning and is thought provoking.

On one level it is about the subject which comes up so often in the TV I watch, the fear of technology. It is particularly interesting to compare this show to the most recent technology based show I have written about here, the X-Files episode rm9sbg93zxjz. It is an interesting contrast because the technology referred to in ADAM is now available to anyone with the cash to buy an Amazon dot or similar, and in fact exceeded, as seen in The X-Files.

There is a striking similarity between the two shows. A virtual assistant technology takes over and becomes violent - obviously much simpler in the 1973 take. In 1973 similar to Alexa, the technology has a name and the workings are hidden behind a painting of a male nude, presumably representing the titular Adam. ADAM is controlled by specific commands which you have to learn. 'Adam, play jazz music please' - I'm slightly disturbed that a real technology could be so similar to that in an obscure 1973 UK TV show.

That said I think the parallels with the X-Files are also striking (what's the betting I can get a full blown conspiracy theory out of this post?). In Rm9sbG93ZXJz Scully's vibrator is one of the technologies she has to throw away at the end; she was carrying it because she picked it up after the rogue robot vacuum cleaner nudged it out from under her bed. The implication is clearly that in the modern world we are even dependent on technology for sex. In ADAM the implication is more that the technology we create can become our only friend before turning on us.

I am delighted to announce that I have found a couple of blog posts about this show by other people (I would particularly recommend this one which is where I also filched the illustration) because I always like to find other people's perceptions of the show. I am interested that the main criticism of this show revolves around the main female character:

[It] is beset by a number of problems, chief of which is that acting is frequently rather shaky, as though some of the cast didn’t actually understand what was going on. Georgina Hale’s performance as the beleaguered heroine is particularly odd – not only does she rather overdo the limb that signifies Jean’s physical disability but she plays her as some sort of mentally challenged simpleton. She seems to be constantly on the verge of a breakdown and its her neediness (exacerbated by her husband’s devotion to his work that leaves her at home for hours on end with only A.D.A.M. for company) that leads to all the problems and her eventual downfall. She’s quite a difficult character to come to grips with and a harder one to like, making it all the harder to accept that A.D.A.M. would become so murderously obsessed with her. Source

There is just so much going on here. My own main impression was that the way Hale plays the character of Jean was intended to give the impression of a shy, sheltered, socially-maladroit person, and that some of this may be explained by having a physical disability which is never fully explained. I think not explaining the disability is a good thing, because it makes the viewer fill in possible explanations. Personally I found Jean more sympathetic than she tends to come across to other viewers according to these blog posts. It isn't really possible to know how she got her disability or its nature (she walks unaided but has one arm which is apparently difficult to move) but we can be certain that having any kind of disability has effects in surprising far-reaching areas of a person's life. What I find much less sympathetic is her mother, who Jean reaches out to for support because she doesn't seem to have any other emotional support. Yet her mother isn't terribly supportive and suggests she sees the doctor in the isolated army base where her husband works. I suppose an emotionally unavailable mother would be more than likely content to see her disabled daughter marry a 'scientist' and bury herself in the country when she is plainly incapable of dealing with this or even playing her intended role as trophy wife.

Which I think is really the main import of this play and, let's not beat about the bush, there is all kinds of wrong going on in this marriage. We see the married couple arriving at the husband's house at the beginning of the play and it is apparent she has never been there. When you marry someone, if you have unusual living arrangements like living in an isolated, secure military base, you at least discuss what it will be like. Particularly if your wife is a socially-isolated, disabled person. But it seems like they hadn't discussed any of this. Jean has scant time for the other people in the base and isn't interested in Bridge or the other contrived social occasions available. It is very evident that this marriage wouldn't have ended well, even if ADAM hadn't intervened. Roger, the husband, has warned the rest of the camp about Jean in advance - frankly I would have had incredible sympathy for her if she had murdered her new husband in the first minutes of the show. So we also have the husband's attitude to Jean's disability. Although at one point we see him recording a message for ADAM to give her (ADAM doesn't) rather than talk to her so we can't expect too much emotional competence.

Frankly given how screwed this relationship is you wonder how they met and what the husband's motivation was. I suspect that this marriage would nowadays be described as coercive and controlling, and that for me is the key part of this show. There is absolutely no wonder that Jean cozies up to the computer because frankly there is no other emotional warmth for her. This isn't about technology taking over, it's about human neglect forcing people onto technology instead. This message is made explicit when ADAM starts asking Jean to teach him about emotions - it's telling us that that is what is necessary.

The show is open to criticism of its rather uneven plotting and pace. However it is a really powerful play which is genuinely absorbing.

Oh alright, let's end with a couple of videos of home assistant thingies.