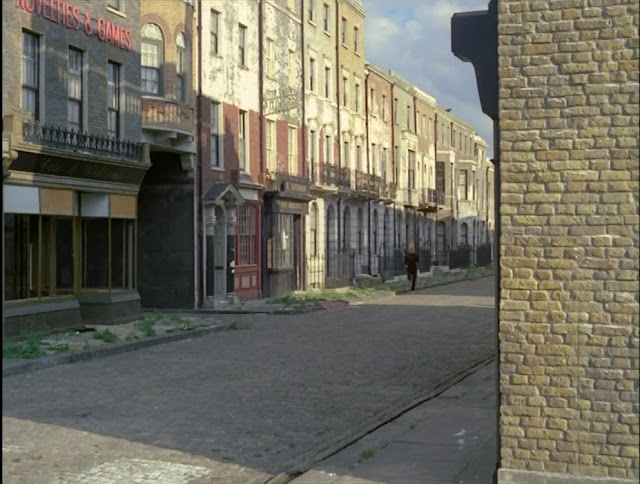 I feel slightly bad that I didn't take The Cat With Ten Lives at all seriously, so luckily a cracking episode of UFO has appealed to me next. In fact I have reacted completely differently to the two episodes, and I'm rather hoping that that says more about UFO than it does me.

I see I'm not the only one with some questions so I'm going to get my criticism out of the way so that I can appreciate it: this episode is confusing, really confusing and makes everyone who watches it ask the same questions about why's and wherefores. These questions are all over the internet and I read round a bit before writing a blog post with the intention of trying not to repeat what everyone else says, so I won't ask the questions all over again.

It is also fascinating, richly plotted, keeps you on the edge of your chair, provides fascinating insight into what Pinewood Studios at Borehamwood looked like behind the scenes, and ticks virtually every boy box for exciting gadgets.

What's not to love about the miniature cars and hovercraft thingy? Those alone would have made any youngster want to sign up for a career in the exciting world of film and TV! The episode involves Straker running off through the cover film studio used for the show. In a thoroughly postmodern move of course the show was being made in a film studio and so the studio used to film the TV show was used as the scene for the cover film studio used in the TV show. Did I mention it was confusing? Apart from the actual studio buildings we see the set made for The Private Life of Sherlock Holmes (1970) - the illustration to this post shows Straker running down Baker Street. I see that these sets cost £80,000 to build and were reused in various other films as well as in this episode of UFO.

As I was watching this I kept wondering what it reminded me of. The time aspect of the plot makes it tempting to think of this as UFO crossed with Sapphire and Steel, and that was the first comparison to cross my mind. However that doesn't feel exactly right, because the enemy isn't Time itself. I began to think that what it was reminding me of was more because of the level of confusion, unreality and twistiness. 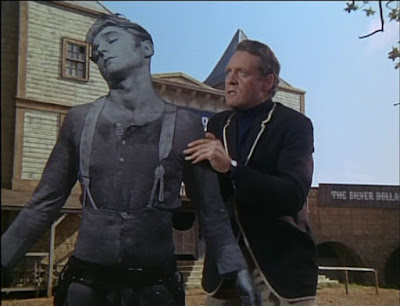 Stay with me on this, but I kept thinking of The Prisoner episode Living in Harmony. Of course what made me think of it was that that episode adds another layer of unreality (a whole Western town which abuts The Village and that nobody has noticed) to an already complex show: exactly what Timelash does in UFO. I'm always fascinated by tropes and am interested to see that the two shows share bizarro episode, all just a dream, fake town, geographic flexibility, out-of-genre experience, and virtual reality. What I'm getting at is that even though there are differences in plot, the two shows have a similar effect on the viewer.

And then I thought that that could be the same for any show which shows that sets and the other paraphernalia of film and TV even exist. To show those things is to acknowledge that what we are seeing isn't real and by implication to sow seeds of doubt about anything else we see. In The Prisoner the whole point is that we don't know who we can trust or quite what is going on, and in this UFO seeing the unreality serves a similar function.

I think there may be an episode of The Champions which uses a set in this way, but without watching the entire show can't place it offhand and would be grateful for a comment if you know what episode it is. Of course the ultimate unreality show, The Avengers, has two episodes set in studios or using a visible set. The less similar to this UFO episode is Epic - mainly because it's about a megalomaniac murderer using a film as a barmy cover. The disused set device is also used in Killer where it symbolises that all is not what it seems. 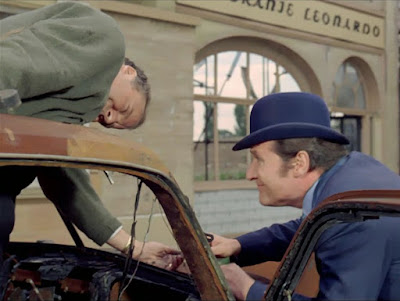 In fact there is another striking similarity between Timelash and a whole genre of cinema, namely the French nouvelle vague. This only struck me when I started wondering why I kept thinking about breaking the fourth wall. Can you tell that I've got my hands on a couple of film studies textbooks in an attempt to deepen my analysis here and intend further posts to be peppered with poncey affectation? The nouvelle vague used a number of techniques including bringing the off-screen space onto the screen - usually, as here, for purposes of narrative, and with the effect of keeping the fact that the film is actually just a film, fully in the viewer's conscious. I'm not exactly sure whether there is a cinema word for what is being done here nor exactly what wall is being broken but it is as if a stage play set in a theatre has lifted the scenery to show the set up behind, as part of the play.

Here the breaking through of a real film studio into a show about a fake film studio adds to the disorientation of the viewer: it is a far more complex situation than in any of the shows I mention above. It also raises the question that the cover studio for a fake studio, did make actual films and would have been both incredibly expensive and very difficult to keep the cover going. The irony here is that the reason the real studio appears - because it was there and there was no need to make a mock up of the mock up - is exactly the same reason the new wave film makers did things like shoot films unannounced on a street complete with the public's authentic reaction: a certain economy and to capture the reality.

You may think that I am subjecting this show to a rather unfair level of analysis, and you would be right. However I am going to carry on mercilessly and give an opinion that I think the show bit off more than it could chew here. The time thing alone would have been gimmick enough for one episode without also going to and fro with the plot. Don't get me wrong - it's great but it's very confusing and you have to watch it if you haven't already.