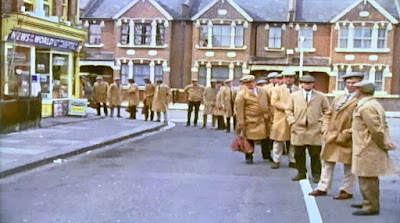 This is really a post about blogging with reference to two shows, rather than really being about the shows so apologies if it is a bit navel gazing!

One of my main motivations for starting this blog was to force myself to think more about the TV I watch, and not just watch passively. this has worked and since I make a point of reading up what the rest of the blogosphere is saying before blogging about a show, I am very aware that often my witterings here are in response to something I've read elsewhere. I try to make this explicit, although usually without attribution to avoid getting into rows or appearing to criticise someone individually. For example I will often say that a lot of the comment on the internet is about one aspect and try to write about another, or often I comment on how my own view differs from the prevailing one. I think some shows just aren't popular but would like to give them a bit of a push because I think they deserve it.

So the content of my blogging is easily described and fairly representative of what I'm thinking, but I am increasingly aware that this blog in many ways does not accurately represent my viewing. Obviously, like everyone else I also watch films but apart from the occasional post you won't find them here for obvious reasons. They're not TV and the films I watch don't tend to be made for TV so I've ruled them out of the blog by its title.

Yet there is also a huge slice of the TV I watch which rarely or never appears here and this post is an attempt to work out why. Examples of this would be long term favourites Dear Ladies, and To The Manor Born. I think both these shows are niche enough to be considered cult but just don't appear here. More recent finds are Kojak, The Streets of San Francisco, The Goodies and The Young Offenders. All totally cult and watched by me with great appreciation but they just don't make it through my eyes, round my head and into blog posts.

I am going to focus on two episodes of two shows in terms of blog ability - Monty Python's Flying Circus and The Goodies. It is almost a breach of the Trades Descriptions Act to run a cult TV blog and not include Monty Python - in fact I comment in the one post I have written about it that I haven't been blogging about it! I see I have managed a grand total of three Goodies episodes. Despite loving these shows and watching them frequently, they're not making their way here.

Beyond the fact that The Goodies always had a problem of perception with people thinking it's a children's show, it's hard to see what would stop me blogging about my chosen episode of The Goodies, Scoutrageous? What's not to love about a show in which as a result of a crime spree by the Goodies under the cover of their octogenarian scout troop, scouting is declared illegal and the Salvation Army is mobilised to combat it? In fact this scenario is looking positively sane in comparison to our current government but that's a whole other thing.

Approximately five minutes into the show I think I've identified why these shows are difficult to write about: they are very visual but without much character development, plot or external reference. So in reality you would tend to end up describing the outline and saying what bits you particularly like. I am not saying this is a problem with the show, obviously.

Which of course leads to the question of how to write about it. I would want to avoid reminiscences about my mercifully short time in the cubs (I hated it so made sure I got thrown out). There is obviously a huge amount of social satire going on here, inverting some things and reflect society. It parodies the sexual purity history of the scouting movement before moving to having scouting represent communism and then parodying the Sally Army with many other jabs along the way. Personally I think the Salvation Air Force would be interesting. These are just a few examples from a list I came up with of the sorts of things I might write about - I won't reveal the whole list because I don't want you all traumatized by being exposed to the contents of my mind. When I think about reflecting at length on the things above, it seems rather to miss the point of the show, which would probably go a long way to explaining my blogging difficulty. Of *course* The Goodies make fun of the scouts and the Salvation Army, they were embarrassed by Mary Whitehouse approving of the show's first series so what else could they do.

I also think what The Goodies and Monty Python have in common is that their humour is very much what happens when you get friends together and to analyze it wrecks it.

I think all of the above would also go for Monty Python's Flying Circus, and while both shows have been chewed over at length, I think Monty Python has a longer history of comprehensive analysis and discussion.

The Monty Python episode I have chosen is the second series Face the Press and literally five minutes into it I have identified my problem. I honestly have nothing to say about the famous Gas Cooker Sketch beyond the obvious reaction of how it accurately spoofs bureaucracy and how it would now involve fewer people and more computers. It is perfect in itself.

Going back to my list of possible subjects I can see that possible ones here are the political reflection that the silliness of the Ministry of Silly Walks is preferable to the homicidal selfishness and corruption of our current government; a comment on how Monty Python uses the same visual language of the Avengers and the Ministry is dressed to represent the Establishment, and finally the significant impact of this episode on future comedy.

But that wouldn't be quite right would it, because it would be like sitting at the feet of Einstein saying how clever he is.

So I end this post about a difficulty I find blogging about some shows with a better understanding of why I tend not to blog about them but not really a clear idea of what to do. I suspect that I will always find this difficult because of trying to avoid the description of shows which is all over the internet. Hmmm.

Perhaps if I'd gone to the Ernest Pythagoras Primary School I would have a better idea of where to take this.