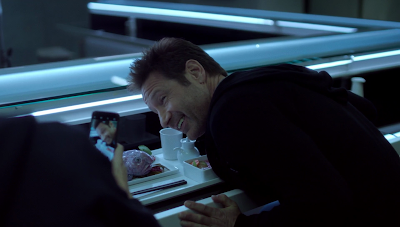 The title is of course pronounced 'Followers', which is also the name of the restaurant. There was a time when it was considered rude to follow people and some people actually sought exclusivity but that all seems to have changed and all sorts of bizarre things go on on social media and its construction of following. I like to think that this blog attracts a quality readership and while I get relatively few comments (and not much spam, strangely) I am pleased to say they are free of much of the hysteria which characterises much online debate. In this the enemy is fairly obviously people who are hard of thinking rather than artificial intelligence, however for the record, hitherto unbeknown to me  the bot-which-loved-Hitler-in-no-time thing actually happened.

As indicated above, in this episode the X-Files revisit the subject of the series 1 episode, Ghost in the Machine, that is what happens when technology goes rogue. In the intervening 25 years, of course, artificial intelligence has progressed in leaps and bounds to the point where it can really screw up your life in a big way when it goes wrong.

That is basically the theme of this X-Files episode, which is rightly highly praised for its economy of speech and setting which gives it a starkness otherwise unachievable. Since we are humans I find the conversation about this one on the internet tends to end up revolving quite a lot about the human aspect - therelationship between Mulder and Scully, rather than the AI aspect.

The meal they go to in the bizarre, otherwise empty (presumably everyone has heard about what happens if you don't leave a tip and how the robots get the order wrong) restaurant is often described as a date. I don't know whether this was intentional but it's a very odd date. An essential point of this show is that Mulder and Scully don't talk to each other on their date but when they have breakfast together at the end they put the devices down and talk to each other. However a date on which you don't talk to each other can only be a date between two people who have known each other for years, and have either run out of things to say again or are just comfortable with not talking to each other.

The restaurant is reminiscent of the painting Nighthawks by Edward Hopper - the painting is actually in the diner where they have breakfast at the end. It also even features a red haired woman and Scully has red hair from here on in the season, which suits her better than the blonde she has been up till now.

Edward Hopper said that Nighthawks was inspired by “a restaurant on New York’s Greenwich Avenue where two streets meet,” but the image—with its carefully constructed composition and lack of narrative—has a timeless, universal quality that transcends its particular locale. One of the best-known images of twentieth-century art, the painting depicts an all-night diner in which three customers, all lost in their own thoughts, have congregated. Hopper’s understanding of the expressive possibilities of light playing on simplified shapes gives the painting its beauty. Fluorescent lights had just come into use in the early 1940s, and the all-night diner emits an eerie glow, like a beacon on the dark street corner. Hopper eliminated any reference to an entrance, and the viewer, drawn to the light, is shut out from the scene by a seamless wedge of glass. The four anonymous and uncommunicative night owls seem as separate and remote from the viewer as they are from one another. (The red-haired woman was actually modeled by the artist’s wife, Jo.) Hopper denied that he purposefully infused this or any other of his paintings with symbols of human isolation and urban emptiness, but he acknowledged that in Nighthawks “unconsciously, probably, I was painting the loneliness of a large city.” Source

I feel rather mean saying this because this is a great episode and I feel like I'm focusing in my INFJ way on something totally extrinsic to the point and worrying it. I prefer the earlier seasons of the X-Files and while I do own the whole series I am not very familiar with the later seasons but several times in series 11 Scully references that she and Mulder have a child together. They live within easy driving distance of each other's houses but yet he has never seen hers before. When he arrives at her house just as it explodes he asks her how come her house is so much nicer than his. So they're on a date, acting like an old married couple, he hasn't seen her house, yet he is the first person she guesses has given her the robot vacuum. This does not add up! It feels like I'm nit-picking but it's an illogicality which irks. I am delighted though, that when we meet their son later in the series he is exactly what you would expect Mulder's son to be - terminally disaffected and totally screwed up!

Of course the apparent inconsistencies may be deliberate to reinforce the discomfort the episode is setting out to create in the viewer. Plus of course it's difficult to maintain consistency in a series lasting several decades but at least get it consistent inside one episode. Now I really do feel mean.

The restaurant they go to is genuinely freaky. The way it is empty is just the start. When the robots get Mulder's order wrong and give him a blobfish you just know why the restaurant is empty, because who would ever eat a blobfish! The freaky feeling of being watched builds up very well here, and I would be inclined to think there was a malicious human watching and you were probably being recorded for a TV show. It has that feel about it, especially when the doors lock themselves.

That is something missing here (presumably intentionally because of the reference to urban loneliness) from Ghost in the Machine where the electronics side with their creator. Obviously the mere fact of artificial intelligence persecuting you for a tip is much more terrifying but it's a relatively impersonal goal. The electronics of a whole building siding with their creator and killing people who wrong him, is much more freaky. There are, however some overtones of Ghost in the Machine - Scully's house is very reminiscent of Brad Wilczek's.

Not for the first time in this season or throughout the run of The Avengers I am caused to wonder what on earth is going on in the version of the FBI portrayed by The X-Files. You would think that two agents who have had a baby together wouldn't work together, but hey, who am I. Elsewhere Scully takes personal calls while at work, about her mother who is intensive care. And let's not even mention contamination of forensic evidence. This is an observation really - it's not specific to this episode and this element of unprofessional behaviour and lack of boundaries has been discussed by the fans at length.

How could this one fail to be glorious in visual terms? Especially good are the fictional brands and apps created for the show - in fact many of them look more user friendly than anything in reality. You literally can't go wrong when you have the kind of robot dog used by New York police. The many drones are great and my absolutely favourite bit is when Mulder smashes a drone with a baseball bat. Actually that bit would have to compete for favourite bit with the bit where Scully tells the driverless car it can best make her journey comfortable by being quiet. To the classic TV geek the scene where the drones chase Mulder in his car is very reminiscent of this scene from the 1998 Avengers film (technology having had a chance to catch up in the meantime):

I seem to be giving out this accolade quite a bit lately but this is genuinely stonking good television and you have to see it.