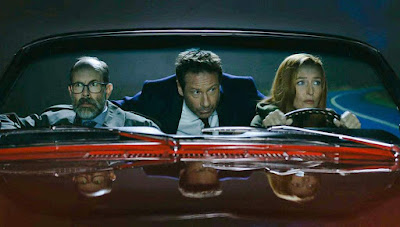 I am convinced there was a TV series in the eighties which had the name of Chelmsford in its title and was set in Chelmsford. It's not Chelmsford 123 because it was set in the present. It was very influential on me at the time and had loads of weird stuff in it. I have never found this show that I remember (suggestions are of course welcome) and the closest I have ever got to the show I remember is They Came from Somewhere Else which certainly seems to be the show I remember but is set in Middleford and doesn't even manage to get Chelmsford into the title. It isn't actually my memory and all this is to point out that I too am a victim of the Mandela effect, or at least I am in the way this show uses the phrase. Technically you have to have a large number of people holding the erroneous memory for it to be the Mandela effect, and I'm the only one who remembers my TV show. Let's just say the meetings of the support group I've set up are rather subdued.

But what if the show I remember was actually broadcast and 'they' have erased all record of it because it was too truthful? What if people have had their memories actually wiped? Am I sounding like a conspiracy freak in true X-Files tradition yet? Ironically this X-Files begins with Mulder remembering an episode of the Twilight Zone of which there is no record and how spooky is that? The X-Files has a knack of finding buttons to press which make us indentify with what is happening in the show. There is even a Dr They whose business is altering memories and he is who we mean when we talk about 'They' doing something.

This one actually applies this to The X-Files itself and is banging as a result. What if nobody, including Mulder and Scully, remembered the third partner? This is all cleverly interwoven with the kind of real things which are calculated to appeal to X-Files fans. Additionally it even shows that a scene is being shot in Canada.

Because of this, this episode is excellent visually and really keeps you on your toes spotting references to various weird things and previous episodes of the X-Files. My favourite part is where Reggie's succession of different employments (right up to water boarding) are shown taking place in the same office cubicle - suggesting of course that they were all the same job really.

Watching the X-Files in 2022 is made especially poignant by the events of the past couple of years. I'm the case of this one the point They makes that there is no longer an objective truth is particularly poignant. It doesn't really touch this one but elsewhere in season 11 there is an episode where the population's DNA means they will die unless they have alien DNA which can be tested in hospital (actually this may be the other way around and it's possible you only die if you do have alien DNA). Either way I wonder how many hospitals get people asking for tests for alien DNA and it's sooo ridiculous given that people have the bizarre conspiracy theory that the coronavirus vaccine alters your DNA. In a strange twist, the X-Files have become the rather bizarre reality. But even though this dates from before the pandemic there's a point it won't go: every time Mulder starts talking about alternate realities, Reggie Something and Scully stop him. This is really about misremembering, we know that's a thing, and there are still depths of weird which are ridiculous. It is possible to read this in a way where Mulder equates to Trump (Source) but Mulder never prompted an insurrection or was happy for his fellow citizens to die needlessly. The great thing about such a reflective episode is it is as much commentary on society as the show.

If you haven't already, I strongly recommend you watch it.