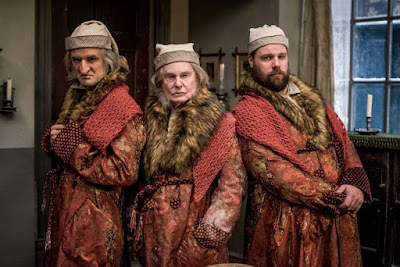 I bet nobody else in the cult TV blogosphere is blogging about this show by the wonderful Mischief Theatre behind The Play That Goes Wrong and who have Dame Diana Rigg starring with them. I have blogged about their Goes Wrong Show here before and series 2 of that show will be available on DVD shortly if it isn't already.
The background to this Christmas Carol is this:

Blacklisted by the BBC, the Cornley Polytechnic Drama Society do not take their ban lying down and force themselves back on the BBC by hijacking a production of A Christmas Carol.

With a little help from Sandra’s aunt, Dame Diana Rigg, the Cornley gang try to make the show work on television, but they soon realise they are completely out of their depth, with no idea how to direct a live studio or handle the special effects. Worse still, their internal rivalries are revealed on television, while an angry professional cast tries to get back into the studio. Source

And you know what, it's wonderful. They fight over playing Scrooge ( ending up with three Scrooges at one point). The entire cast of the Cornley Polytechnic Drama Society threatens to resign. Props disappear - luckily not the ones the lines are written on. Which is really lucky because Jonathan Sayer does a great act of not remembering a single line he has ever learned. Chris Leask as stage manager has more presence than usual because he has to keep appearing and making things work. Marley's ghost falls through a hole created by dropping his heavy chains. The green screen software goes wrong and so we see a scene of Paris. Members of the cast discussing their love lives is broadcast. Tiny Tim is played by Henry Shields who's a big chap.  Apparently in external scenes the cast even came into contact with people not involved and created havoc.
This show is an absolute delight. Besides, you won't get to see Diana Rigg run over Derek Jacobi anywhere else!
In fact I heartily recommend everything Mischief do because of their impeccable work on all aspects of making their shows go wrong, including the publicity: 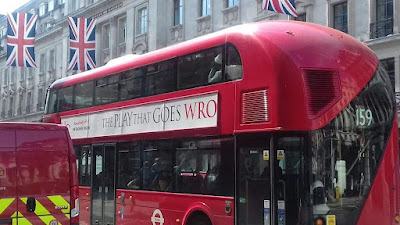 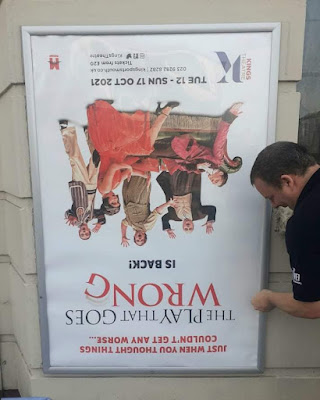 You can see part of the play which made their name here:
To finish here are Mischief having an interview go wrong:
I do have other things in mind to blog about soon but since this is my definitive Christmas post I will take this opportunity to wish a hoppy Yuletide to all my readers!
(Oh - if you want more Mischief there is also a Nativity complete with nine wise men, the piano bursting into flames and there definitely is room at the inn.)
2020s TV Comedy Mischief Theatre