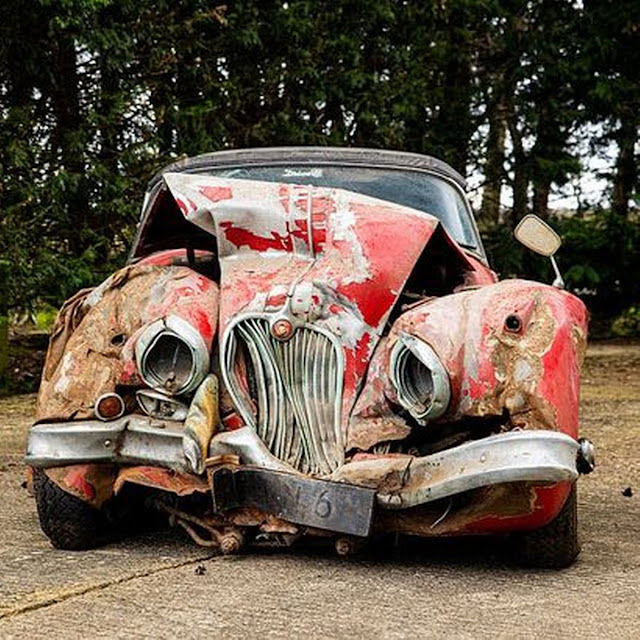 I'm afraid I have got out of sync with these posts and this one should chronologically come before the last, so we make a brief return to the sixties. I am delighted to find, on reading round for this post, that Grant's son, despite not being old enough to remember this the first time round and probably the only one in his friendship group to watch quality TV like this, has the discernment to recognise that if you get into a white Jaguar you are going to die. This is the sort of memory which becomes very special as you get older. I have no idea whether Mark 1 and Mark 2 Jaguars exist in the US but when you come across one in later life it brings back your childhood viewing with Dad.

I see that this is the first time I have written about this TV series here. There is a very simple reason for this: The Saint was one of the series I watched and loved as a child, and while I have several box sets, I have rather avoided blogging about it to leave my fantasies intact. You see I wanted to *be* the saint when I grew up and that is a dream best left undisturbed. I also wanted to work for International Missions Force (or sometimes UNCLE) but those dreams have rather been exploded. I am therefore reduced to fantasising about working for ISIS and let's face it that dream will now never be destroyed.

Anyway, there is more than enough about The Saint on the internet if you want the background, and surely anyone reading this post knows all about it, so I am not going to do a general background on this show.

But how completely ITC is this show? I have never thought of Monte Carlo as particularly somewhere I would want to go, but I hope it got lots of tourism income as a result of ITC's repeated use of it as one of its sophisticated settings. What I like absolutely best about ITC is its streak of snobbishness - obviously it is too late to discover whether this was to tempt hoi polloi at home or intended for the prosperous American market. Whatever, its displays of sophistication make wonderful escapist television. Where you place Jason King in this is something I really can't articulate but will have to because his show is coming up!

I like Templar's sassiness. I love him answering back the princess, and this attitude puts this show in a different category from most contemporary TV, which in my opinion was more conformist. Templar is also of course portrayed as a criminal so of course he's going to have attitude - answering back nanny starts a slippery slope!

It may be because this was the first colour episode but as well as being a fan favourite this one doesn't half get a bashing on IMDB for a few bloopers! It's obviously been subject to a level of attention it wasn't intended to stand! Usually I think I ought to make an effort to criticize a show, even if I like it uncritically. This is to attempt to maintain a veneer of intelligent criticism and try to hide the fact that this is really that-tv-blog-where-the-bloke-who-never-wears-a-shirt-rambles-on-about-whatever-takes-his-fancy. Because obviously that is exactly what this blog is and you're all very kind to keep coming back when there are far more sensible places on the blogosphere. Anyway, I am watching this show purely as escapist TV and waiting for the white car to hurtle over the cliff, so I'm not going to go to the trouble of trying to criticize this show.

When it comes the white Jaguar crash is cunning. The footage has been cleverly woven into a scene where you would expect the Rolls driven in reverse by Templar to come a cropper. Watching these shows has also made me realize that I expect the crash to come at the end, as it does here, and find it disconcerting when it comes earlier. On reflection I think this is because I am expecting the crash to come at the end as a climax and am forgetting that it could even come at the beginning in some shows to provide a murder or a mystery.

Incidentally the red Jaguar which illustrates this post was crashed 24 years ago and sold earlier this year for £90,000. It could be worth £250,000 restored. Gulp.

My favourite line is the bit when, in response to 'I don't suppose you've ever seen five million dollars' worth of jewels?', Trmplar replies, 'Not since Zsa Zsa left town.'