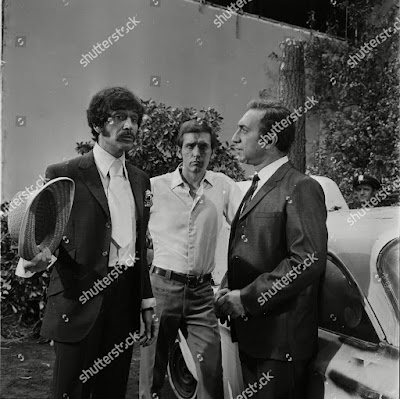 Department S is one of my all-time favourite shows, simply because the plots are insane and the characters wild. It is as if they looked at every other show, dropped a few LSD and started writing what they saw. I have really noticed the difference coming from other ITC shows for these posts, and have also realised that the comparison of different shows is another thing we miss out on with the tendency to binge watch box sets.

On the other hand this one has been so confusing. The moral is, if you have two or more cars written off during the course of a show, don't make two of them white. It makes it terribly confusing to Google five decades later. Even the internet movie car database, which is otherwise scarily precise, seems to have got confused. Anyway as far as I can tell the first white car to crash, which is driven by a dummy, is a first generation Chevrolet Corvair (don't tell me if it isn't!). I went to the trouble of finding out because I was interested by its transatlantic styling, which contrasts with the other cars. I'm wondering whether it was because of ITC's eye to its American market. I mean, they had a strategy based on the idea that having an American star would make the show appealing to the American market. They may well have thought the same about cars. Neither idea makes a great deal of sense to me. You don't see people queueing up for films based on the nationality of the actors, except where it's a very niche local cultural thing, such as the Mexican masked wrestlers who also made films. Of course this still can't explain the phenomenon that is Jason King, who I assume was a native of Cloud Cuckoo Land, but that's a whole other thing. And ITC obviously hadn't noticed that some Americans looove all things English and call themselves Anglophile. Anyway, I will never know whether ITC's policy of casting by nationality explains the sudden appearance of a crashed Chevrolet here.

It's also not explained by economics. You would think a studio tight enough to keep reusing footage of one car crashing wouldn't suddenly splash out on an American car to crash. It stands out from the legendary Jaguar and a British banger would have been more obvious. I have also had some difficulty finding out whether they were sold here in any great numbers or whether that one would have been imported by an enthusiast. There is an irony, though, that the car driven by a dummy has a reputation for bad handling, indeed of being dangerous, rightly or wrongly. There was an earlier Czech brand of car, Tatra, using the same rear engine with swing suspension combination, which was considered so dangerous that Hitler forbade his senior officers from using them at all! However this knowledge doesn't seem to have got through to Chevrolet and this reputation killed the car.

So... several crashes and loads of chase action. Much of it against a green background, which personally I really like. That is actually what I think I like best about Department S, that everything is slightly overdone but unreal. Here of course it draws on the frequent subject of technology, and in the area of cars, which would cause much anxiety. In 1964 in the market just round the corner from my prestigious apartment a system of automated parking was used for three days. And then never used again because people just wouldn't trust their cars to it! It wasn't even very automated, just a system where the cars were put on trolleys, making the required space much smaller than for a car park where you drive round. And certainly nowhere near the automatic parking which is a commonplace now!

When the Jaguar crash comes it is very effectively set up with great attention to detail and calculated to be tense. In fact I think the full effectiveness of this episode is that it deals very lightly with a really scary subject which is definitely the stuff of nightmares!

A blog I recommend very highly, Department S Reviews has some interesting things to say about this episode and its placement in the run, so I won't repeat them here. As far as I can see this is a fan favourite, largely because of the human relations aspect within the Department S team. I like the way Annabelle plucks Jason King from his captors.

I think my favourite bit is the scene in the pub where a woman is making eyes at Jason King, not the most obviously heterosexual man in the world for a start. He arranges times with Sullivan to allow a date with the woman, but when she is collected by another man, who addresses her as darling so is obviously romantically involved, he pulls back the times by two and a half hours. So a date with Jason King lasts two and a half hours, ladies. It is the most hilarious thing ever, not least that she is giving him eyes but King is only ever a spare! I'm not sure whether this reflects on him, on her, or on the kind of woman he attracts. None of this ridiculousness stopped Peter Wyngarde being mobbed by adoring female fans! If you admit to remembering the seventies you weren't there!