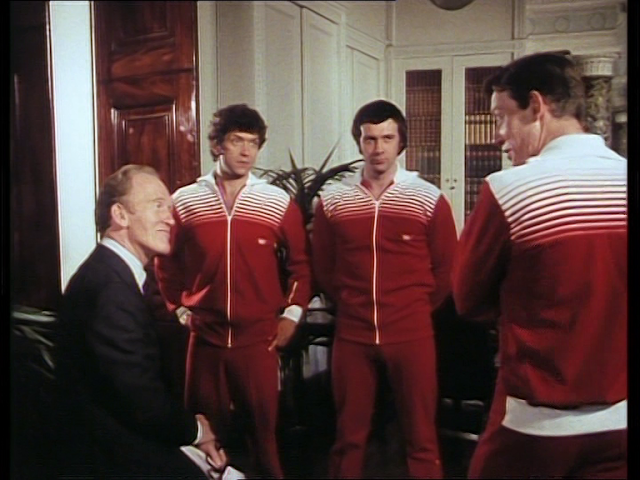 High time we had some Professionals again. I've picked this one for unusual reasons for me - apart from the interest of the episode itself I have taken an interest in the familiar guest actors. Perhaps I should just say that I have never claimed to be consistent!

This was the second Professionals episode ever made, although originally shown late in the first series. It required some reshooting of parts with some different actors, and as a result you can find a number of difficulties documented on t'internet with things like continuity. The wonder for me is that despite it being filmed so early, the Professionals thing is pretty much established. The relationship between Bodie, Doyle, and Cowley is already what it would be for succeeding series. Their attitude towards the female agent is already set in stone.,. and so on. For a series to be up and running so early is quite something. No matter that there are plot holes (notably that we are let in too quickly on what's happening and the chase through an actual live demolition is ridiculous) that you could drive a Ford Capri through.

Other things which don't hang right are that since we discovered what caused the plague nobody has handled a dead rat with bare hands or placed it on your desk. I was also going to say that the matching tracksuits plot device was ridiculous - the theory being that Cowley protects the man they're guarding by putting Bodie and Doyle in the same tracksuits (which are ridiculous BTW) so his chances of being killed are reduced to one in three. I was also going to say that in reality Cowley would tell him to run on the spot indoors and not go out. And then it struck me that even though The Professionals is usually considered gritty realistic 1970s TV, this particular incident is so far out of reality that I am wondering whether The Professionals should actually be approached as unreal. We are far enough away from the seventies for any excesses in a show to be seen as the eccentricities of the most tasteless decade ever, but I wonder whether the show is an overblown, camp parody.

And so to the familiar faces, and the larger than life presence of the show continues in them:

Roger Lloyd-Pack plays Ramos, principle baddie. A versatile actor, I like him in Spyder's Web, where he was obviously younger and played a very sharp member of staff in the film company. You will see that a lot of the criticism of this episode mentions that in true seventies form he looks too ridiculous to be taken seriously. It took me a long time to realize why he creeped me out so much and eventually realised it's because he looks like martial artist, confidence trickster and convicted sex offender James Hydrick. God, the seventies were weird.

I had some difficulty placing Ed Bishop until I realised he was Commander Straker in UFO. 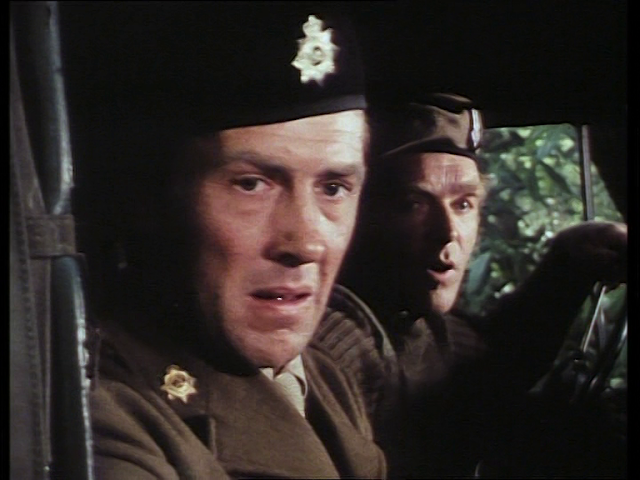 But the wildest familiar face in this is one who doesn't even always get credited because his part is so small. This episode of The Professionals has a fully fledged porn star playing a bit part as one of the two security guards who get hijacked by Ramos (he's the blond one). John Hamill started in the sixties as a body builder and physique model but did do both soft and hard porn with both women and men. Whichever aspect did it, it appears although he did have some serious acting roles afterwards they tended to focus on getting his kit off and it appears his past militated against his acting career. The bit part here would illustrate that.
I'm glad I did this post and am now contemplating whether to do a series of posts on The Professionals based on its unreality, although I have less stamina to do series of connected posts these days, in addition to always having had a mind which tends to leapfrog. I am also contemplating series of posts on orphaned odd episodes of shows which are online but the rest of the series inaccessible, and on the ITC shows using the white Jaguar footage. Heigh ho. They might happen.
70s TV The Professionals