I really don't think this Avengers is a favourite with the fans and I'm not going to beat about the bush, I can see why. It lurches too far into the realm of slapstick for most people, has a plot which can only be described as labyrinthine, and includes enough gimmicks for three normal episodes. I'm not going to try to redeem it but as is my wont, have a few opinions to pass.

Right at the beginning when the secretary drives off the grey car she drives off in is a significant part of British motoring history. It is badged as a Morris 1100 with a 1965 registration and is part of the ADO16 range produced by the British Motor Corporation and later British Leyland. These were the best selling cars in Britain for most of the 1960s and in the Fawlty Towers episode where Basil gives the car a damn good thrashing, it's an ADO16 he does it to. Bizarrely they were designed by Sir Alec Issigonis who came up with this clunky design despite also designing the permanently curvaceous and sexy Mini. He was very quotable, notably saying that a camel is a horse designed by a committee! You won't find an ADO16 on the road nowadays because they were total rust buckets. Instead they live on in what makes them historic - their silhouette was used in the redesign of our road signs in the 1960s and these designs are still used today. You can see an example in the sign warning you not to drive into the harbour.

Perhaps I should have a go at saying something about the actual show. 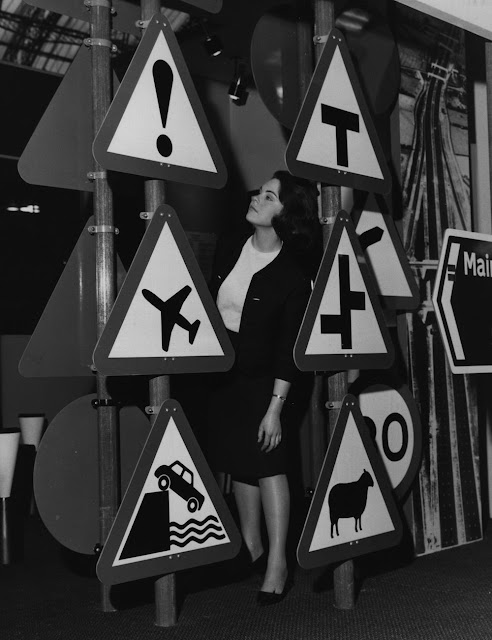 There is a point at which Steed begins a limerick which has given the internet some difficulty in finding an ending. Of course it is entirely possible that no ending was specifically intended, however I have found a limerick about a young lady from Gloucester, although its published version requires a slight adjustment to Steed's beginning, which would make it 'There was a young lady from Gloucester, who met a young fellow who tossed her, she wasn't much hurt, but he dirtied her skirt, so think of the anguish it cost her'.

I like the basic premise of this episode enormously - a fraternity of decayed vaudeville artists using underhanded methods to try to start up their act again. How Avengers is that? It's got the perfect Avengers background of eccentrics and arguments. These theatricals, you know. The CUPID project is similar to other projects in The Avengers however it tends to get lost.

What always strikes me as being most uncomfortable with this episode is that there is a vein of great sadness underlying the story. The vaudevillians are out of work because vaudeville isn't a thing, put out of business by the cinema and later by TV. These are men in the saddest position of all, that the thing to which they have given their life has come to an end. Bradley Mahler touches on their inability to adapt. And the discomfort for us is that we are watching the show on the exact thing which brought their world to an end.

It would be reasonable to be bitter in the circumstances and it's entertainment for us. Gulp.