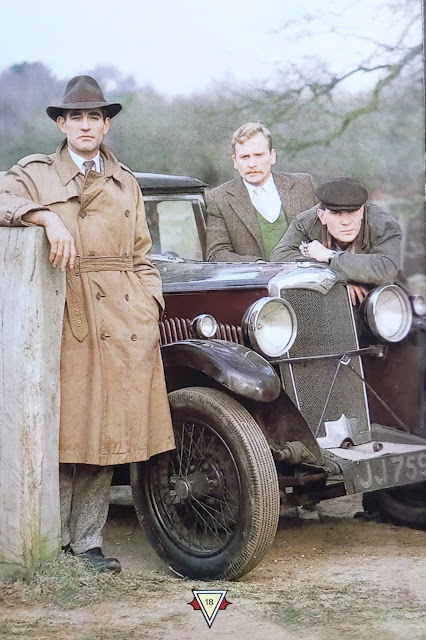 This is a series I have had on my radar to write about here for yonks. Like many shows the Dick Barton 'franchise' has had many incarnations - this is about the 1979 TV series, however there are previous radio serials and the films from the forties starring Don Stannard as Dick Barton, as well as comics and novels. The TV series is available in a complete box set, and my only criticism of it is that it can be difficult to navigate because the different adventures are only given numbers. This one is number three, which is on disc three.

There is a certain irony of course, that I have recently been very snooty about period drama and here I am enthusiastically reviewing a TV show made in the seventies but depicting the forties. And depicting it very well indeed. I have thought about why I like this but generally don't like period drama, and I think it might be because this isn't starting from scratch - you only have to listen to the radio series or see the films to know that this show has an original to reproduce. Additionally, in my division of real/unreal TV this show is the exact opposite of the gritty TV of the seventies. The comic-style titles suggest it is unreal from the start, and there is an element of safety in nostalgia. The problems of the 1940s, along with the enemies, were no longer so in the seventies.

There is also something wonderfully unreal about the plot - and it picks up on the attitude to technology we so often see here - an invention which destroys certain substances, including metal and glass, but leaves the others intact. That's how the house vanished - it was left as a heap of bricks. If this plot sounds familiar, it is because you are thinking of The Avengers episode The Rotters, only there it was just wood which disappeared.

To be honest I have a strange sense of déjà vu writing about this familiar trope of an invention which can be used for good or evil. As always this one's inventor has invented it for peaceful reasons, but of course it is then in the hands of people who see it as the perfect weapon. Since I suppose I should make an effort to be critical although I adore this series and can just sink into it like a hot bath, the disappearing Ray is a mammoth plot hole if you think about it. I'm being really picky, but I'm no good at physics but even I know that things don't just disappear, they have to become something else. So I suppose there is a definite science fiction element to this adventure - the rest are more straight detection. I'm being even more picky if I say it's a bit difficult to think of a sensible application for the day. In the demonstration we see on a soldier we see his gun and helmet just disappear - as a weapon I can see it would be devastating as long as only one side has it but other than that, why would you want metal and glass just to disappear? One you can see through anyway and the other has a scrap value, but I'm being overly critical. 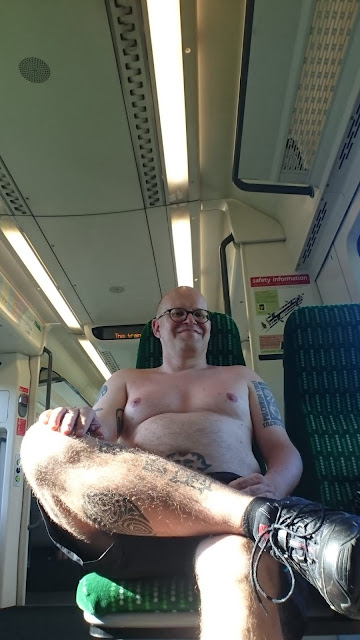 Excellent production. The show doesn't put a foot wrong in costumes or props. The pacing is fast enough to retain interest and the series is taken out of the seventies by being shot in a slightly brighter colour pallette than the endless beige of the seventies.

All in all, a show which I recommend without reservation and which is Stonking Good Television.

Oh - I meant to say I used a picture for a bit that didn't show me, but it felt strange so I've gone back to a picture of me which needless to say shows my manly chest. 💪 Surely regular readers will know that I am that man who takes his shirt off at every opportunity. I don't think I have posted the second picture yet - I went for the day to Stratford with a friend. It was boiling hot so I took my shirt off and stayed like that on the journey home.