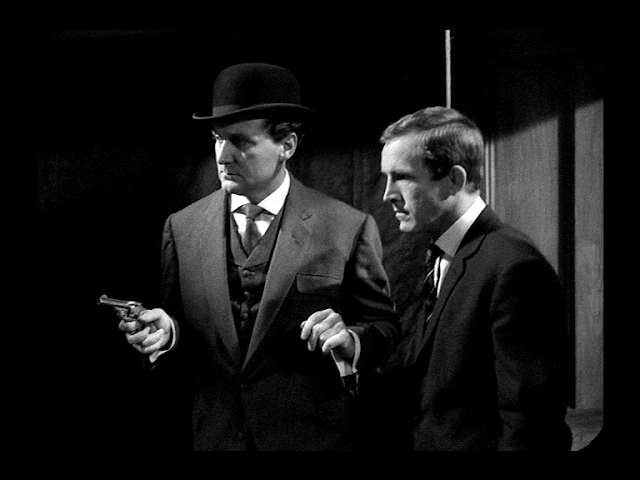 This post is based on the episode reconstruction on the Avengers Special Features disc.

We go straight into the underworld with this one, but goodness how old fashioned it seems. On the one hand Im sure many a retail worker supplements their income with an Only Fans these days, so the sex work has probably become more widespread but the mechanics of 1960s prostitution seem so old fashioned. When I lived in London in the nineties I knew someone whose job was putting the advertising cards in phone boxes for sex workers. There were a bunch of them who worked for different pimps and they spent every day cycling round taking down other people's cards and putting up their own. Even that seems old fashioned now but - yikes - it was 30 years ago.

Do city workers still live in hostels? I doubt it, but it indicates the girls aren't being paid enough to live independently. I wonder whether it would have been acceptable for a young girl to house share in the early 1960s - I suspect it wouldn't have been.

The fact that men and women are in very different positions is further indicated by the fact that Keel's cooking is hopeless! I love that Steed pretends to be a doctor and this horrifies Keel!

However I have a real difficulty with the credibility of this one. What kind of doctor can just drop his workload or feel free to involve himself in random escapades as Keel does? Why does Steed feel he can just involve himself in a random investigation being carried out by his department? And indeed take it over with his doctor friend and nobody else from the department. My biggest criticism would be that the solution to who is behind the prostitution ring - the evil landlady of the hostel - is a bit formulaic.

But I feel I'm being unfair. I am sure when this first broadcast in 1961 it was very edgy and had many a mother checking in on her daughter working in the city. It has also made me want more because I love the moody black and white photography.

Not for the only time, Steed's tactics come under criticism. His utilitarian ethic is rarely acceptable to the people he uses.

If you want to hear the actual script I believe this has been released as an audio by Big Finish.