The Children's Film Foundation: One Hour to Zero 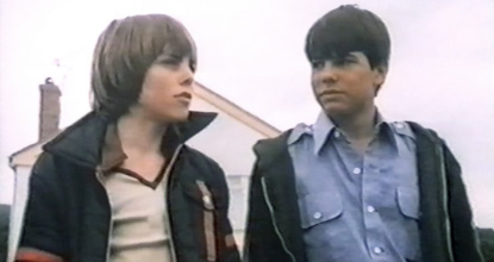 Goodness, our world has become a strange place very quickly. You will be pleased to know that you can read this post without fear of infection, because it turns out I have coronavirus antibodies. I wasn't aware I had had it, but I've got the antibodies. This programme is rather topical in another way, because it is set in Wales, another place the English took over and forced everyone to learn English.
It was just as topical in 1976, because it features a nuclear power plant, and of course people imminently expected a nuclear winter: my own mother actually had an evacuation plan that began (I was tiny) 'put John in a wheelbarrow'! My own view is that nuclear power is completely safe, if you can sit with the potential if it goes wrong and you can face the need to contain the waste for thousands of years. The trouble was that the reactors of the time were not safe, because they allowed people to do stupid things like see what happens if you remove the power rods, which is what happened at Chernobyl. I have a thing about nuclear disasters, so I'm weird. Stop the press.
The plot of this one is a familiar device, actually: the protagonist has some event happen and comes to either in a different place or the same place with something different, such as no people. Just off the top of my head I would think of The Prisoner and The Avengers episode The Hour That Never Was as programmes with a similar premise. It is very well set up here  and comes as a complete surprise after the events before, which in turn explain why the two boys are in the situation.
This film (I think the CFF did films mainly rather than TV, and remember them often being a bit stodgy) is an absolute delight. The cars alone would be worth watching it for. Apparently there is only one Mark 3 Ford Cortina registered in the UK but you can see tons of them here, and when the village is evacuated one family leaves in a marvellous old car which I suspect might be a Rover. And the clothes are wonderful - I found myself wondering how the two boys didn't get blown away in their flares.
There is a theme of authority and responses to it just under the surface here - for example the two boys keep representing different views on what they should do, and I am interested how the dad tried to get the policeman to let him deal with his son's vandalism and not do anything about it. The height of disestablishmentarian authority avoidance is a violent criminal played by the wonderful Dudley Sutton with an even more wonderful Welsh accent.
If I was being really picky I would say that Andrew and Toby, the two boys, have slightly different accents and one is quite a bit posher than the other, despite putting in a few glottal stops. Far from unusual in real life but it really shows when they're talking to each other. That is unless you take Paul as representative of authority and the establishment.
If you want to see it you can get it on the BFI's Children's Film Foundation Bumper Box here.