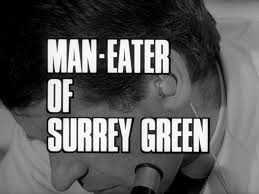 In theory I am working from home but surprisingly can't get on to remote working and have done nothing for two days. I have additionally been offered another job, and since my manager couldn't be bothered to acknowledge my notice or speak to me, I am not minded to be helpful! The perfect opportunity to write a blog post.
I don't know why I have never noticed that this Avengers is one of those which spoof a whole genre of film, in this case the dangerous plants theme which is a sub set of 1950s creature features. It is suitable for the Avengers  which so frequently refers to the 1960s love and fear of science, which at the same time was mirrored by a love and fear of nature.
One of the things I find interesting about this is that in theory the action leaves Avengersland completely, going as far as Denbigh, which is in Wales. There are also other distances involved, by means of rockets and what have you. There is therefore a sense in which this show is an exception to the normally constrained world of the Avengers.
Unfortunately this far-ranging ambition doesn't pay off as far as the plot is concerned. My advice would be not to watch this too critically, as is often the case with The Avengers, but to sit back and enjoy it. When it is watched like that it holds together, but if you subject the plot to too much scrutiny it rather falls apart. I have read that many or all of the scientific references and names of plants are fictional or just plain wrong, which of course would be annoying for specialists.
What did they think they were doing? I cannot believe the Avengers was only aimed at people with no knowledge of the science mentioned at all, but I also don't want to make out there was a slapdash failure to check facts. I am going to take the view (on no evidence at all) that the fictional science and nonexistent facts were deliberate, and therefore can only have been intended to give the knowledgeable the message that this isn't real, which is well in line with the approach taken from series 4 on. It is easy to find other examples of unreal nations, people, events in the series, and the Avengers deals in broad brush strokes and stereotypes rather than facts.
As always, writing these blog posts teaches me things and apparently this Avengers is strikingly like the Dr Who adventure The Seeds of Doom, which was also written by Robert Banks Stewart, in a hurry as a replacement script.
Apparently there is some dispute amongst the fans as to whether Steed puts poison on Mrs Peel so that it's taken up by the plant, or whether he poisons the plant. Obviously he's poisoning the plant directly!
So to summarise: not one which takes too much scrutiny, but does have many of the recurrent themes of the time.
My favourite moment: Steed revealing the cactus hidden under the blanket in his car.
60s TV The Avengers