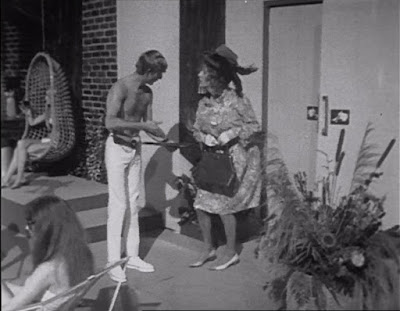 There is a youngness and freshness about the humour of the sixties and seventies , before the cynicism of Thatcher's Britain put paid to it. You have to be young to produce certain sorts of humour - age has its own humour - and perhaps in releases of the last few years we see this best in The Goodies and in Do Not Adjust Your Set and Not the 1948 Show, both of which have been released this year by BFI. I recently fell for the complete Goodies and am enjoying the episodes I haven't seen before.
I had forgotten that the celebs queued up to guest on this show and the wonderful Molly Sugden features in this one. The best thing is that the character she plays is so close to Mrs Slocombe that it just misses her talking about her pussy. Incidentally I also love that she is a minister being blackmailed for going to the Playgirl Club - a topical reference in the age of the Playboy Club. This episode of course reverses the Playboy Club theme by having topless male staff, and the episode reverses it again by having Tim go to the club in drag because it is women only.
Three weeks later he is still there surrounded by the young women! And that is what I like best about this episode, the sexiness of it. The Goodies poke fun at the culture of the time in many ways, such as by their parodies of advertising, and elsewhere poke fun at the culture's approach to sex by reference to Mary Whitehouse. Here the norms of the time prevail, because we see nude girls at the club, and there is a lot made of the Goodies' attraction to the girls. I particularly love the inflatable dolly secretary.
However this episode doesn't get good reviews on the Internet - possibly because it hasn't been seen much. A fair criticism is that it is a vehicle for ogling nude girls and thus rather lacks depth in other areas! Another one is that it only survives in monochrome  and the illustration of Tim first entering the club gives a good idea of its quality after restoration.