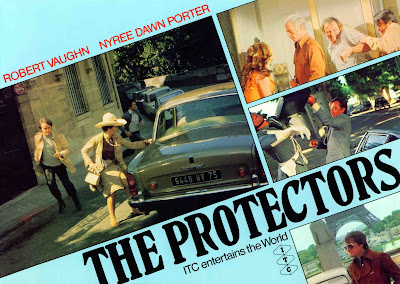 There are a confusing number of TV shows called The Protectors, so for clarity this post is about this one, which is also in my holiday viewing. This episode was written by Trevor Preston, and while the ITC stable may not seem the obvious place for his writing, Preston's characteristic rich characterisation and psychological complexity are perfectly suited to this episode of what can otherwise be a rather formulaic show. Normally The Protectors features the standard settings (sophisticated for the time) of the ITC shows, but this one enters what the contemporary media wouldn't have hesitated to call a cult.
The subject is therefore one of interest at the time. The only thing wrong with the cult is that it has a Christian basis, combined with esoteric beliefs, and thus feels much more like the more respectable organisations dating from an earlier period. One of the regrets of my life is that we used to have a Liberal Catholic pro-cathedral in Birmingham and I never went. The new religious movements of the time tended to have more Eastern origins, not least as a result of the hippie trail, and were notorious for being heavy-handed with their followers.
Which is the point of this episode. Anne has joined the organisation willingly and decided off her own bat not to see her father, which of course he doesn't believe. There is also the issue that she stands to come into a large fortune.
There is also the problem, that the community has attracted someone who isn't, shall we say, the full shilling, who thinks that killing in the name of God is OK. Ironic really, that the community itself comes out smelling of roses, and Anne's father comes out as a grabbing greedy control freak. It's just that the community took in a murderous lunatic who thinks he is chosen.
As I said, complex psychology. I don't really have a criticism of this show, except that would anyone seriously wear the flowing costume of the cult on a daily basis?
ITC