Doctor Who: The Macra Terror 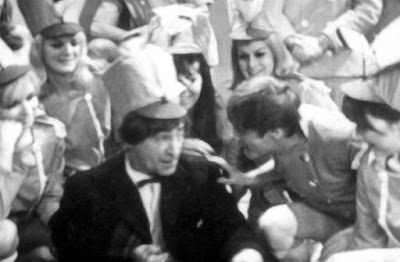 I'm not normally one for animated reconstructions of erased TV  but I saw that this had come out and I simply had to have it. I have seen this missing Doctor Who before - apparently there are several animated versions but the reconstruction I have already seen is the Loose Cannon one. While the Loose Cannon website has vanished, rumour has it that copies of their shows are still knocking about on the Internet.
Having said I don't go for animated reconstructions, this one is superb, and there were points at which I could forget I wasn't watching the original series. The only thing which looks slightly wrong is the lettering used for the episode titles.
The plot is interesting, because it is set in Earth's colonial future. I can't find a reference to how this future happened  but is an interesting device at the end of the sixties when Britain's colonial past was winding up, to envisage a colonial future. Given that the colonists speak English, perhaps Britain decided it wanted another colony, just further away than abroad? It is also interesting that the colonists have a typical colonial view of the place they colonise, that it is dangerous and backwards. The festival atmosphere is only the way colonials have always lived, everything is set up to their advantage and they don't actually have to do any work, so they spend their time drinking gin and playing bridge.
Is it just me or is The Colony strikingly reminiscent of The Village in The Prisoner? - I'm thinking of enforced jubilation to order, underlain by virtually constant threat of violence. I would not like to go so far as to theorise any influence because the situation is different, their isn't a reason for resignation to extract. The colonists' motivation is far less straightforward, they explicitly believe in forcing health and happiness! The other similarity of course is that the colonists' conditioning stops them seeing the reality - of course it doesn't take much in the way of conditioning to make humans follow the party line and join in group-think. A further similarity is the unseen Controller, who echoes Number One in The Village. Pity he gets snatched by the biggest dressed crab in history. In fact the themes of conformity, nonconformity and rebellion continue throughout the adventure.
Another thing I love is the macra themselves - the reviews on the Internet all say this animation has improved them over the original, but in the original they're so sweet. They're right up there with the monster in the film The Beach Girls and the Monster!
I suppose you will want some criticism but I don't have any. Sorry.
You will love this if you like the TV I like or just the TV of the era.
60s TV Doctor Who