The Avengers: Take Me to Your Leader 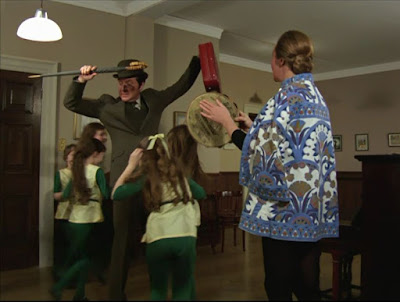 I was convinced I had already blogged about this Avengers episode, since it is one of my favourites, but am unable to find it if I have. The episode came to my mind recently, because once again I am having a spot of bother at work. I solemnly swear I don't go looking for it! But when I explained to my manager the reason that it is a phenomenally bad idea to stop anyone except management reporting incidents, I found myself using the words of Mother in this episode, when he comments that his interlocutor would be foolish not to suspect him . Nobody should be above suspicion, and the best-intentioned of people can, and do, go off the rails. Since then one of my colleagues has quite rightly blown the whistle on their failureto treat a particular event as an incident, and management have wound up looking very silly indeed. Anyway the upshot is that all three of their seniors are looking for other jobs.
Incidentally, in this one Mother dictates a memo to Grandma, whom we never see, and in it he comments that it is essential that all agents get their priorities right. He is of course quite correct, and it is only slightly alarming that something like 35 years since I first saw The Avengers I seem to be turning into Mother, or at least being the unheard voice of his wisdom! Who would think that a throwaway series like The Avengers could provide life lessons... The idea of suspecting everything possible is embodied in the fact that one of the couriers shows up on the radar but is 'invisible' to the agents, and turns out to be a dog. The courier was there but nobody noticed him. The dog then attacks the similarly-unseen scarecrow who turns out to be an agent. 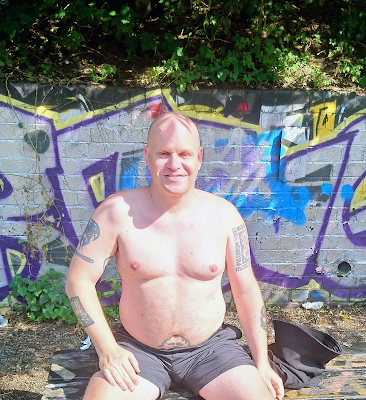 However the theme of suspecting everyone but everyone being mystified, does mean that there are more authority figures seen in this episode than usual. We all know that Steed and Miss King work for some shadowy organisation, but it more apparent here how the organisation is responsibleto the upper echelons of society, and in fact how much even Mother is answerable to other people. Of course the Avengers manage to identify who is the rot at the heart of the institution and save the day.
One of the main things I like about this episode is the way it takes relatively normal situations and... I suppose the word would be 'Avengersifies' them. Take the ballet school Steed goes to. I love the archetypally posh Penelope Keith as the harassed teacher of the school, with her Godfather-inclined niece. I love that she has a fight with Miss King, who wins. I also love that Miss King tries to be pink and fluffy with the little girl, but Steed knows that a bribe will work much better. It is very much our world, but given a twist. And this Avengersification is carried out partly by tine details, including the little girl's fairy wand being one of the keys to the case and one of the recipients of the case taking his key out from under his toupee.
Even apart from the little details, visually this one is superb. The sets alone would make this one worth seeing. Even apart from the psychedelic nightmare which is Tara King's flat, the other sets are wonderful, particularly the musical instrument collector who for some reason has a muslin curtain right the way across his flat. And the episode is so tightly scripted that the visual elements become parts of the plot. The visual language used by The Avengers would indicate that these traditional symbols mean that they are not amongst the criminal underclasses, but in the apparetly stable background of upper society. The red case actuallyechoes the famous red dispatch box which is used in our parliament, so there are obviously Big Things at stake. The vehicle in which the baddie meets his fate by poisoned gas is that symbol of the singing sixties, a Mini, and so it symbolises his abandonment of old values for some new world intended to disrupt the safety of Blighty.
I find it interesting how this episode manages to get in some sexiness and yet be sexist at the same time. One of the recipients of the case is very flirtatious indeed with Miss King before the case orders him to kill her. It is however flirtatious in a rather condescendsing way. Then when under the name of Tara Cavell she takes the case to the judo school, the man who is supposed to receive the case is very disappointed that she is a woman - always a mistake around Avengers girls, although of course in this case it is actually a blow from Steed's trusty bowler which finishes him off.
Obviously I am far from unbiased about this episode but I have wracked my brains to try to criticise this, and I suppose if you were determined to criticise it you would see that the plot is just plain incredible. But then this is The Avengers and so that is what you would expect.
All in all a superb Avengers episode, tightly plotted and since I have been watching it for years I can testify to the fact that it takes repetition. Oh - it is a bank holiday here, and the forecasters' prediction of a scorcher has come to pass as you can see.
60s TV Me The Avengers Topless on TV