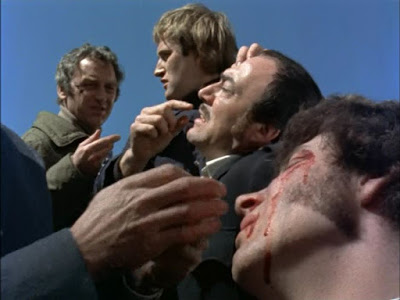 Chicago Calling (on a sideline matter):

You mentioned at the start of this post that you were considering writing about Charlie Chan movies, but were uncertain about how to do the subject in the 21st Century.

Welcome to The Club.

I was in High School (mid 1960s) when I became a Chan Fan.
Channel 9, an independent station here in Chicago, began running the Fox Chans from the '30s and early '40s, with Warner Oland and later Sidney Toler in the lead role.
These were Old Whodunit Movies, which I loved in any variation you can think of (my favorite TV show of the period was Perry Mason, which was basically a new version of the same old thing).
The various racial/ethnic/social considerations were years away from cropping up; all I knew was I liked the mysteries, the detectives, the comic relief, the whole package - these movies were FUN!
If that's your attitude, consider me a kindred spirit.
I strongly suspect that most of your patrons here share that feeling, so if you were to write something here, there would be sympathy, or at least empathy thereto.
Anyway, it's your blog - so roll your own and see what happens!

Well yes that is basically my attitude - I do like them and in fact lovef them as a child. I can also see that the world has moved on and they are likely to be unacceptable to many audiences. Ironically how they do Chan himself isn't half as bad as the portrayal of the black servant. It adds a little frisson that I sit here in the Chinese Quarter watching them!

If I were you, I would just go ahead and write about Charlie Chan and make any comments you think appropriate based on the view from today. Your readers can add any comments they like, but there's no reason to ignore the films.

By the way, where can I, in the US, get access to The Sweeney? I looked at a DVD set awhile back and it was prohibitively expensive. I'm a big fan of John Thaw and would love to see the series.

Well I may do, although of course they don't really come under the remit of the blog, which admittedly I bend from time to time. I am actually more embarrassed that I watched the films with great enjoyment as a child and was thus brought up with their attitude to Chinese and black people!
Rumour has it that there are complete episodes of The Sweeney on YouTube. I hope they work in your area. Perhaps somebody will have a better and less costly solution than getting a Region 2 DVD player...