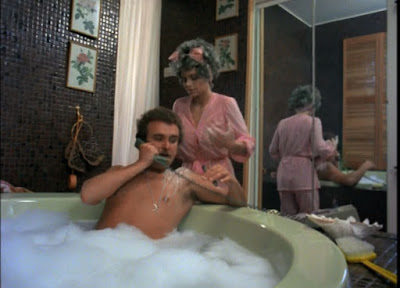 As I am writing this, I am waiting in for a plumber, who is going to install a new hot water cylinder. Hence the illustration: I am looking forward to a long hot soak like Tony Selby but don't worry, I won't inflict pictures on you. Long term readers are already traumatised by the sight of my man boobs anyway.
Obviously I have been watching The Sweeney, prompted by the episodes I have seen recently of its BBC competition, Target. Of the two, frankly I think The Sweeney is the superior: Target tried to improve on the recipe of The Sweeney and wound up overdoing the violence, with the result that the characters tended to become one dimensional. Target also feels much more claustrophobic than The Sweeney, which in comparison depicts a greater richness of human interests, relationships and interactions.
The result of The Sweeney's cult status was that the stars of stage and screen queued up to be beaten up and screamed at by Regan. I had forgotten about the guest stars and in this episode in addition to Tony Selby we have the ubiquitous Julian Glover as his solicitor.
The other way in which The Sweeney is superior is in its depiction of the time. I was alive when this was broadcast but way too young to have seen it, so can't comment on how the show would have looked to viewers of the time. To the twenty first century me there are two sides to the way the show now looks: the one which is more frequently commented on is how bleak the London of the time looks - areas which have long since been gentrified are still suffering from bomb damage of the second world war and around the vanished buildings is a violent world of people scraping a hand to mouth living.
The other 1970s depicted by The Sweeney is the up to date world of luxury and aspiration. Just look at that bath! You certainly couldn't get one in that size and colour now! There are other dead seventies interiors in this episode, including a flowery wallpaper which I remember from the hallway of some family friends. Additionally The Sweeney (in common with Target) uses the luxury cars of the time, mostly Fords. I have only recently realised that many of the cars of the time were also aspirationally named, after the European resorts which had fairly recently been opened up by package holidays and which represented foreign travel and sophistication. In Ford's case there are the Cortina and the Capri, and the Triumph Toledo and Dolomite are named in the same pattern.
The premise of this episode is the relatively simple one that three crooks have managed to get away with their crime and left court to celebrate in the most ostentatious way possible, leaving the police looking rather silly. There is nobody else available to prove they are crooks so the case is given to Regan to deal with, using all the subtlety (shut it) and sophistication (I am not a gentleman) at his disposal. Avoiding spoiling the plot, the way he does it is very naughty indeed, to the extent that at the end his bosses are forced to pretend they didn't know what he's been doing. I commented that this show has a depth of human life absent from Target and what makes this episode superior is that there is a moral question at the heart of it. Regan knows that the crooks are crooks so doesn't shy from using some fairly dirty tricks to prove it, to the despair of his bosses. The question is whether that is acceptable in the circumstances. Regan obviously thinks it is, and the depths to which he will stoop make this show fairly horrifying even now.
Unusually for me, I genuinely have nothing negative to say about this show, not even the many familiar faces. I think The Sweeney is a show you would either like or hate but that's what makes it cult TV.