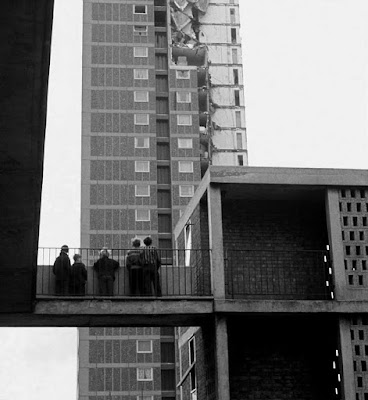 Recently I went to Sheffield, largely to see Europe's biggest listed building, which is the postwar development of Park Hill flats. I won't go into the tale of hope, disillusionment, deterioration and redevelopment using private money in any great detail. But Park Hill is the sort of development which was in it's hay day while Our Sort of Television was being broadcast. This episode of Doomwatch is (rather postmodernly) about another development of that type, and with the show's knack of predicting coming events, foretold the Doom of high rise living.
Well, I say foretold, but high rise blocks of prefabricated construction were already doomed in this country after the partial collapse of one called Ronan Point (pictured) in 1968, three years before this was broadcast. Doomwatch rather tells the tale of human suffering in the blocks. It paints a picture of the ability of a tower block to cause isolation and mysteriously turn people into violent monsters.
Apart from the violence you wouldn't believe the emotional pitch at which people live in Ambleforth. Even Dr Chantry, sent from Doomwatch to research the effect of the development on people, is reduced to a quivering wreck in short order. This is portrayed as being the effect of poor, cramped, conditions and cost-cutting, even such things as not providing enough lifts.
The extras are absolutely superb in this episode. I particularly like the creepy maintenance man, who has a creepy master key to all the flats, and then has Dr Chantry turn on him after he creepily comments on her making things worth while for him.
There is just one thing wrong with this, which is that it depicts Ambleforth as tatty and run down. That is anachronistic for the virtually new building depicted in the titles. It is perhaps a case of the show making its own polemic point visually: high rise living leads to disrespect for everything and ultimately complete breakdown. The reality even into the 1970s was that many people in these flats still saw them as luxurious after the slums they were moved from. And Doomwatch has perforce to show the community in the flats, although of course it centres on Fay Chantry.
My favourite bit is where one of the residents comments that the flats are so self sufficient if you were to lay in a month's supply of food you wouldn't have to set eyes on another living soul. What a dream.
70s TV Doomwatch