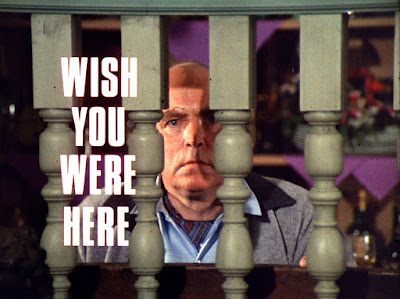 I'm on holiday this week and hence a post about one of my favourite Avengers episodes, which is a jolly romp about a hotel. Except it isn't, since this Avengers draws on the classic fear found in many a dream, where the protagonist finds himself in a situation where nobody believes him. In this case the prison is a luxury hotel and nobody can believe it is a prison.
Out here in the real world this situation is of course what underlies many a situation of abuse, and it is no coincidence that I am writing this post shortly after the Abbot of Ealing Abbey has belatedly resigned from his position in the wake of the inquiry into child sexual abuse showing the paucity of his response to complaints. One of his predecessors is in prison after being on the run from the police, and another monk and several lay teachers are also in prison.
But who would have believed that those holy men would be abusers? Just as who would believe a hotel would be so difficult to escape from? That is the genius of this Avengers, that it places fear and intimidation in a setting of luxury, creating mixed feelings in the viewer. My favourite part is the escalating efforts to stop Tara leaving.
Something I hadn't thought of, which is so obvious when it's pointed out, is that this episode is one long nod to, and parody of, The Prisoner. Mother takes the role of Number 2. Another aspect of the plot, not knowing which of the guests are on which side, is another borrowed plot element.
My other absolute favourite thing about this is that the hotel is a real hotel. You can stay there. I presume they let you out again.
I've also noticed something else this time, normally I don't like familiar actors, and the fact that many of the actors appear in other Avengers episodes is a common criticism of this episode, but I don't mind it here, and don't notice them. It was only when I read other reviews that I noticed them at all!
Crown roast, anyone?
I see I have written about this episode before, here.
60s jobbing actors 60s TV The Avengers