By John - January 19, 2019
Remaining in the 1970s (terribly modern by my standards), we come to another episode of The Goodies. I see that the boxed set of the whole BBC series is out at a huge price, and I might get it when it comes down a bit. I also have several double disc sets as it is, so I'm not sure what to do, especially as I sometimes find having everything can be a bit wearing. After all the best bits are selected for selection boxes.
One of the best things about this episode is not to do with string at all. It is the spoofs of UK brand advertising at the time. The brands include Mr Kipling's cakes (notorious for its cosy olde worlde adverts for its mass produced cakes) and Birdseye fish fingers. Not only are fish fingers the world's weirdest food in my humber opinion, but I'm glad I'm not the only one who found Captain Birdseye frankly rather creepy. On one level the advertising part of this episode is as much social commentary as it is humour.
Reading around people's thoughts on the internet, the nature of the social commentary gives way more trouble now than it probably would have done then. The sexy cigar adverts of the time are parodied in a segment in which Tim Brooke Taylor (TBT) is offered a piece of string in a cigar box by a woman in a wet t-shirt. At one point one of the characters (sorry I forget which and can't find that bit now) gives this sensuous description of a woman's body in a wet t-shirt, which I think was supposed to parody the sexual element of much advertising at the time. Flake chocolate, for example, was advertised (well before the watershed) by a woman eating it suggestively and then a bath overflowing. This was, after all, the 1970s when pretty much anything went, despite a concurrent backlash from second wave feminists about the objectification of women's bodies. The fact that men's bodies are actually more exposed (Raymond Baxter appears in wet string underwear at one point) didn't seem to be a problem at the time, except that of course they weren't objectified. So the sexual mores of the time are giving trouble, as are the racial attitudes portrayed at various points. I know I tend to bang on about this, but the other major problem of 1970s TV, that the stars have tended to go on to get criminal records for their sexual proclivities, is also present. 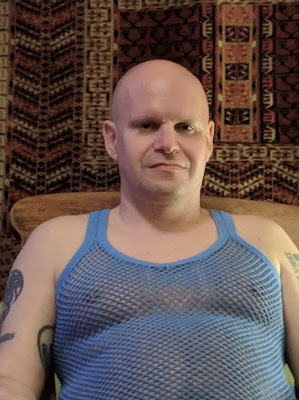 Not only is the show spoofing the adverts of the time, but also the TV, particularly Tomorrow's World. I wrote recently about the dangers of depicting the future in television: unless your show is wiped, if you pick a date in the near future people will be able to see how wrong you got it, and of course this was the main difficulty that Tomorrow's World had. In retrospect the show now looks so old-fashioned and has been parodied more than once, including in the show Look Around You. Here, as a result of the Goodies' advertising of string, the show does an episode all about how string is the material of the future. The point is that everything is made of string, and of course it's not useful for many things, such as hip replacements. Ironically string actually is very useful and has a scientific use in the sort of underwear shown in the show. Like old-fashioned cellular blankets it traps air between the cells and keeps you warmer in the winter. In summer a string vest is wonderfully cool - I like them myself.
Leaving aside the difficulties caused by changes in attitudes in the past 40 years, this show was plainly intended to be a lot of fun, and looks as if it was a lot of fun to make. The final madcap sequence includes quite a bit of messy stuff and manages to get in more spoof advertisements, this time for Dulux paint, Hai Karate and Heinz baked beans (in the face, of course). It's probably very old school but there is nothing like a bit of slapstick. If you're having trouble keeping something amusing, get messy or drop your trousers.
My conclusion is that this show is a lot of fun while managing to include social commentary of the time. It is handicapped by showing the social attitudes of the time, and so you have to forget all that if you want to enjoy it as it was intended. On the other hand, if you want to discover the social attitudes of the time, it might also be perfect!
70s TV The Goodies