Cybermen/Cybernauts with Reference to Doctor Who! The Moonbase 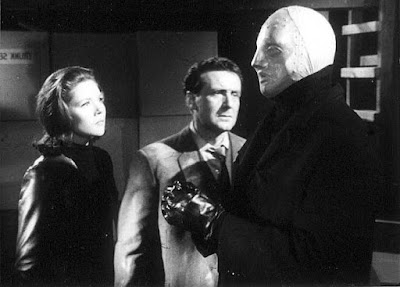 I have been watching The Moonbase, and I'm liking it very much. Not for the first time it has made me ponder that Cybermen appear in Doctor Who, and Cybernauts appear in The Avengers.
Cyber of course indicates that something pertains to the world of computers, information technology and, nowadays, virtual reality. Much of this was a fond dream in the 1960s but the appearance of this word reflects the contemporary enthusiasm for the brave new world of science, an enthusiasm I have written about here frequently. I have also written about the corresponding fear of what happens when technology gets out of hand, which is of course present in the depiction of both Cybermen and Cybernauts. I had wondered before whether anyone else had made a connection between these two monsters, and of course fandom didn't fail me, see for example here. That link also kindly did my homework for me and revealed that the Cybernauts were first broadcast a full year before the Cybermen made their first appearance in The Tenth Planet in 1966. It also ponders the similarity of the two monsters' chopping motion, which I had made myself, but doesn't follow the connection round full circle to The Avengers. I would like to think that this Who, where the sugar in the coffee is a problem, was influential on the sixth series Avengers episode, False Witness, where the milk in the coffee is the source of the trouble. The Cybernauts look more like the Cybermen in the latter's first appearance than subsequent ones and I see that tellingly the working title for The Moonbase was either The Cybermen or Return of the Cybermen. 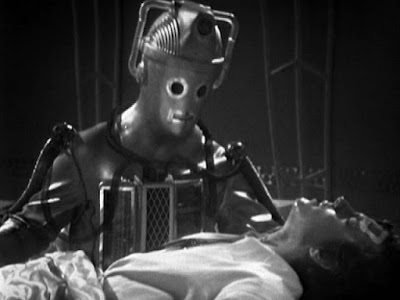 I'm afraid I have been forced to come to the conclusion that these coincidences are where the similarities end: the two enemies were dreamt up in the same historical time. It is also clear that the Cybermen are not quite the invention of a single mad genius, although they are sometimes attributed to human invention. The space and time setting of Doctor Who provides a very different setting to the class-bound world of the Avengers, and if you want to read about the Cybernauts interpreted in terms of the British class system, you can read about it here, which page I must also credit for the image above.
I have to confess to a personal bias in these restored Dr Who episodes: my personal preference is for the soundtrack to be put to existing screenshots or even drawn still pictures. This is in no way a criticism of the monumental effort which obviously goes into recreating the missing episodes.
I like The Moonbase a lot. It's a taut story by the standards of many Who adventures of this time, exactly the right length. At this length of time I don't find it frightening, but probably would have done fifty years ago. The DVD has a commentary track and some extras which will help the viewer along. 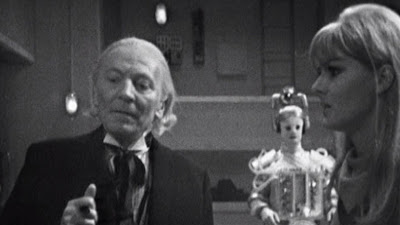 The Moonbase has a great strength, which is unfortunately also the only weakness I can think of. The sets and Cybermen''s costumes are very effective. This means that the humans' costumes aren't so effective and the base's staff uniforms consist of white T-shirts. On the other hand this makes a clear distinction between the humans and aliens, makes the possibility of actually living on a moon base seem more attainable for the normal person.
Ultimately the point of this Dr Who is exactly the same as that of the Avengers episodes about the Cybernauts: it is that technology can be dangerous and ultimately we are superior to machines. After all we can't be dissolved with nail varnish remover. Because obviously you would need that on a moon base. Oh, and my absolute favourite bit is where Polly asks the doctor if he really is a medical doctor and he says he took his degree in Glasgow in 1888.
60s TV Doctor Who The Avengers