The Avengers: The Superlative Seven 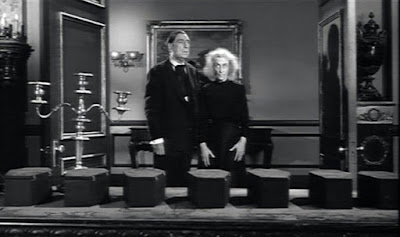 This weekend I have watched the House on Haunted Hill (1959) for only the second time in my life. I have had it saved on my hard drive for a number of years but haven't watched it again because I remember it as being rather inconclusive and unsatisfying. I have much preferred it the second time, for Reasons which are not entirely clear to me. It has however set me thinking about some possible connections with this Avengers episode.
The superlative seven it's another of those Avengers episodes which Tend To Be  written about fairly dismissively in the blogosphere. I have a feeling that this is because it is perceived to be a remake of the Cathy Gail era episode dressed to kill. And of course it is, or rather it is another episode which uses the same basic plot device off a number of people being called together and then being picked off by various methods. 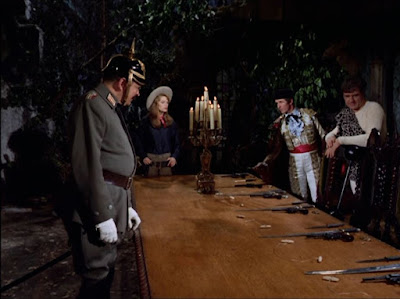 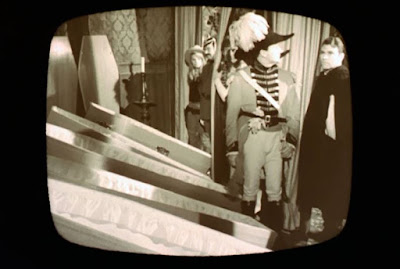 Let me get of the way right at the beginning that I agree with the basic criticisms of this episode, and in fact do agree that dressed to kill is a superior treatment of the plot device. The superlative seven makes it overly complicated, and does away with the most basic elements of this plot, that the audience should not know who is behind the events depicted.
The plot device is of course extensively used in English literature, and perhaps the best known example is Agatha Christie's and then there were none. Of course Christie could be the Direct inspiration for this adventure, but I do feel that haunted Hill must have had a large hand in it, at least visually. I have considered whether this episode could also draw on the genre of old dark house literature, but feel that what makes this difference is the fact that the Adventurers are taken there by deception rather than ending up there on a stormy night, which is usually the premise in horror films.
The house to which the seven are taken bears a strong visual resemblance to the house on Haunted Hill, internally at least. There is also a visual device common to both the film and this Avengers, weapons being laid out for the participants. In the film they are laid out in a series of miniature coffins, well here they are laid out on the dining table. The miniature coffins containing the guns in the film, here become a line of full size coffins for the participants as they died. Visually I feel that the film is the natural source, and that this episode therefore cannot truly merely be a remake of dressed to kill.
Some elements in the superlative seven are taken more it from the Christie novel. The fact that the participants all received invitations from different people that they are unlikely to turn them down, is found both Christie and in both versions of The Avengers adventure. The superlative seven managers to be even closer to the Christie novel than dressed to kill, because it keeps the image of the strangers taken to a desert island with a dangerous Menace hanging over them.
8 weakness of this episodes plot is also what makes it an Avengers episode: The events of this episode what happened in the real world. In the real world if you were to lure 7 people to Almost certain death there would be an outcry from there relatives, particularly if they were the sort of public figures in this episode. The fact is that the events of this Avengers episode could only happen in the world of The Avengers! It is also made rather dissatisfying by the fact that we as viewers can see what is going on know what the participants are having to guess. In this this episode is in a great tradition off fairly cosy crime stories, where there might be a few murders on the way but we know that our enjoyment will be ensured by the ends being tied up at the end.
I have failed to comment on the great name actors who constitute the cast for this episode. This is a great compliment coming from me, because the fact that they are famous actors does not dominate the plot at all.
60s TV The Avengers