The Avengers: Legacy of Death 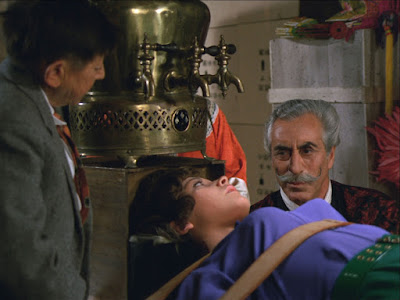 I have rather bizarrely been put on antimalarial medication for my arthritis. I was telling a colleague at work this, and commented that it was the result of a lifetime in the tropics. She herself is from what used to be british Guyana and made a remark about being Colonial. It was only afterwards that I placed my quotation from this episode.
Sidney Street is perhaps exactly the kind of fantasy old world character that I was imitating. He is certainly one of my favourite villains in The Avengers, and I also like that this episode of draws heavily on, well, pretty well every mystery you could ever wish to mention, also of course Street is based on the Maltese Falcon character who is obsessed with obtaining the falcon.
This episode is of course not the only time that fictional characters burst into the world of The Avengers, many season 6 episodes take that inspiration from fiction, but my personal opinion is that this is the best.
So effectively spoofs the genre of pretend Chinese Detectives , who feature in films starring such detectives as Charlie Chan and Mr moto. Sitting here in Chinatown I get the same sort of politically incorrect thrill from watching this Avengers episode that I do from watching Charlie Chan. This Adventures episode, though, also parodies the racial attitudes displayed in the films. Chinese culture is seen as in scrutable, mysterious, and is therefore used in this Avengers episode as the cover for one of the other people who want The Dagger.
I'm never sure how popular this episode is with the fans: Light it probably wouldn't be that popular with the hardcore Mrs peel fans, and for those who dislike Tara King it would probably exemplifies the ridiculousness off this season. And it certainly is ridiculous, only in Avengers sort of way, making much use of the Magical omniscience which characterizes the show. Google how do all of the villains know where steed lives? That said, in avenger land there is probably a telephone directory of secret agents! Not only would they be able to find him , but the events that happened in parchments in this episodes require there to be no meaningful security whatsoever!
Nor were the fetishists ignored, at least as far as the original episode was planned, when Tara was intended to be tortured by tickling!
If there is one major criticism it is that the plot is too thin and the episodes is merely a succession of pastiches. Personally I don't mind that, and regular readers will be aware of my humble opinion that these later Avengers episodes should be enjoyed for their atmosphere rather than their plot. That said this one is clearly intended to be rather unsatisfying because of the complete disappearance of the stone. Of course you could say that  consuming this expensive champagne in the world points to Tara and Steed being the most valuable commodity here, and they after all are the only ones who didn't really want the dagger of a thousand deaths at all.
60s TV The Avengers