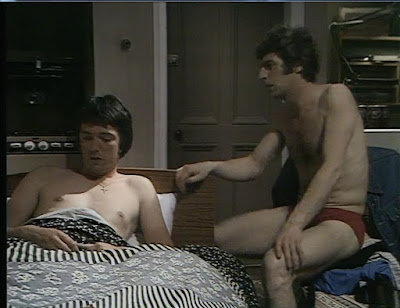 I have watched through the whole series in a day while I have unwell and have some impressions.
1. When you watch the show like that its different authors and abrupt cancellation really do show.
2. This isn't a bad thing - it goes with the plot of an occult conspiracy.
3. The theme music and visuals give exactly the right impression.
4. My original impression that in places it's a gallery of 1970s pyjamas, remains.
5. Bizarrely for the age, while there is obviously a sexual relationship going on, Anne remains fully dressed.
6. Also bizarrely, Tom wears progressively less as the series goes on, and not just to a bare chest, but has a conversation with his brother wearing only his underpants, when elsewhere in the show we see he owns a dressing gown.
7. I feel a certain bleakness about the show is deliberate.
8. How did the writers know the plot of the X-Files, twenty years later?
I quite like this format of post, actually, I know I tend to be a bit verbose.