The Avengers: The Norse Code 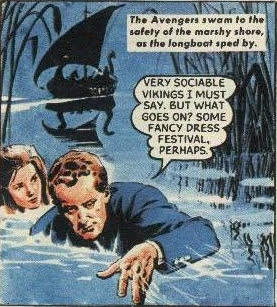 This is of course one of the Avengers stories published as cartoons in Diana magazine in the 1960s and dramatised in recent times by Big Finish. I have written about at least one of them here before and commented on how hugely impressed I was. I remain hugely impressed: in fact these adventures give me hope that what I choose to call the 'authentic' Avengers formula can still be recreated. In fact this is an exciting time across the board for Avengers fans, what with a recently-discovered series 1 episode being released next month, and I have even heard a rumour that Big Finish are going to dramatise the novelisation Too Many Targets, which features all the Avengers girls at once and which I like enormously.
You will note that I say the 'authentic' Avengers formula. You will also note that I set myself up as the arbiter of what is authentic and what is not. A lot of the Avengers fan fiction littering the internet is - in my humble opinion - marred by the fantasy that Steed and Mrs Peel (or any other of the Avengers girls) are getting it on in any shape or form. That is not an error made in The Norse Code - Steed and Mrs Peel pose as husband and wife (bizarrely with different surnames) and of course we fans of the show know that that is not for the first time. It is purely in the interests of their avenging, of course.
In fact the reason The Norse Code and other plays of this stable give me such hope for future Avengers adventures is that despite being expnaded from the relatively meagre source of cartoons, they are absolutely faultless. That in itself gives me hope that there are writers around who can accurately reproduce the recipe for a late-series Avengers episode and make it into a full-length adventure.
The recipe seems relatively simple. Stick a load of eccentrics, oddities and secret agents together in the heady environment of the late 1960s and that would seem to be it. That apparently isn't it, though - that would ultimately be a recipe for a caricature of an avengers episode, and what adds the magic is the use of a number of narrative techniques (such as magical omniscience) and the creation of the Avengers atmosphere which I have written about so often here. What The Norse Code gets exactly right is the right balance of these ingredients without overdoing it. It starts off with Mrs Peel bizarrely learning Conversational Old Norse before Steed tells her 'we're needed'. It then moves into the description of how the missing agent is missing - with exactly the right amount of the magical omniscience which makes the series what it is, before introducing a cast of eccentrics. This is *exactly* the right way in, without any wasted expansion, and gives exactly the feel of a series 4 or 5 episode.
The level of eccentricity and unreality - which are ultimately what make The Avengers a safe series to watch rather than a nail-biting one - are also exactly right. The Norse Code does this by placing the threat in an obsession with the Vikings - I know I'm always banging on about the importance of watching these series in the context of their own age, but we must remember that in the 1960s this would have made a refreshing change from the usual Cold War threats found in much of the TV of the time. This device serves to make a very real threat unreal, and therefore less threatening. 'Bring forth the flaming torches' notwithstanding. In fact reflecting on this has made me reaise that this device is one repeatedly used in The Avengers to take the threat out of the situation. If this episode feels like any of the TV episodes, I would think of The Town of No Return or The Living Dead, both characterised by the same device of a very real threat which is divorced from the real threats of the time and by being made unreal, is made to feel safe.
I am honestly trying to think of any valid criticisms of this Avengers episode. I'm not slow to express my own opinion, as regular readers will know, but frankly I really can't think of any. Not one. Other people may have some. For example you won't like this if you don't take to the sheer ridiculousness of the plot. But in that caseyou don't really have any business watching The Avengers at all. Hard-core Avengers fans won't like anyone but Patrick Macnee playing Steed, but I personally don't dislike that.
My verdict on this as on the other Big Finish Avengers adventures adapted from Diana comic is that they are superb, and furthermore give hope to the fans that it is still possible to write an authentic Avengers adventure. Hopefully we will see more of them in the future.