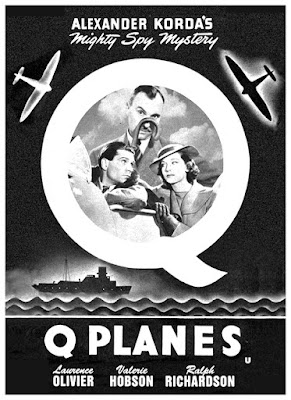 The tag I have put on this post may seem to be a mistake, but if you thought that this was another of my occasional posts about films which are obviously not TV shows but which I think will be of interest to my audience, you would be mistaken. In fact I have been meaning to write about this film here for ages, because one character is credited with being an (or possibly the) inspiration for the John Steed character in The Avengers, so this show is, as it were, one of the things which come under my heading of What Came Before the Avengers. Perhaps I should say that in the US it was released as Clouds Over Europe.
A mere two and a half minutes in we get to see the Major Hammond character for the first time - and frankly, it's Steed. The hat isn't right, but the suit, umbrella and silly ass presence are all Steed there in person.
And Major Hammond not only looks like Steed, he acts like Steed. It would be such a Steed thing after getting knocked out on a job and arrested by the police, to get them to take him to his department to be interrogated by...himself.
The film even utilises the magical omniscience technique which The Avengers uses so often and to such good effect. No explanation is given for how Major Hammond is where he is at the opening of the film. It is evidence that he is a big man in intelligence but no time is wasted giving the background to the intelligence problem which is the reason for the film.
To make the identification complete the setting of the film even feels like The Avengers. The settings of the scenes are the solid, reassuring traditional interiors which in the visual language of The Avengers refer to the Establishment and reassuring solidity. A reassuring solidity which is occasionally prone to infiltration by The Enemy, and of course occasionally one of our old families goes wrong and inbreeding results in the production of a Diabolical Mastermind.
It is evident, though, that the inspiration for The Avengers came from a certain element and one character of the film alone - the intelligence/Steed character part. I was going to comment that in many ways the rest of the film feels very much like any wartime film. However I don't think that is actually true - I think the background of the aircraft factory is exactly the sort of RAF-ish setting in which Steed would have fitted in perfectly - despite having been in the army. On reflection I suppose what I'm thinking is that the aircraft factory represents the sort of social milieu (apart from not being upper crust enough) which would have created Steed.
The aircraft factory also serves as a reminder of a past age which has definitely gone. Did works canteens in the 1930s seriously have cut flowers on all the tables? Would works canteens which weren't set in a posh world have had them?  - somehow I doubt it. The factory is also interesting for not having a single person with a regional accent, not even the sort of generic northern or Cockney regional accents which the cinema of this age used to indicate a working class person. So this film is actually set in a dead snobby social setting. That said, on another level it may even represent the sort of unreal British social strata depicted in...well, The Avengers, that's where.
In addition to its depiction of posh social strata the film is acted the cream of the acting profession at the time, which makes me surprised that it has apparently been allowed to go out of copyright rather than being released on limited boxed sets. The copies downloadable on the internet are even fairly good quality as far as I can see. I genuinely can't understand why this film is not seemingly in amongst the greats of (actually just before) wartime films.
I do have a few criticisms personally. The plot is confusing for a start. I had to reread the synopsis on wikipedia several times as I was watching it to catch up on what was happening. I would also identify a generic difficulty in films where people are of similar status or wearing similar clothes that the characters become confused - but this may just be me and others may not find this. Obviously the Steed character always stands out from everyone else. In fact this film may be the nearest we will ever get to seeing what Steed would look like in something approaching the real world - taking as read that the world depicted here is still not really ordinary but doesn't have the conscious weirdness of the world depicted in The Avengers. The result is the obvious one - that he tends to stand out, and that is perhaps the real weakness of this film, that Major Hammond doesn't come across as a convincing intelligence man, the stock of whose trade would naturally be that he should fade into the background.
Nonetheless this film provides a fascinating insight into a possible source for the ideas contained in The Avengers, and indicates that the Steed character wasn't hatched without outside influences, but built on the ideas of a film released 20 years before The Avengers started.
Not TV The Avengers