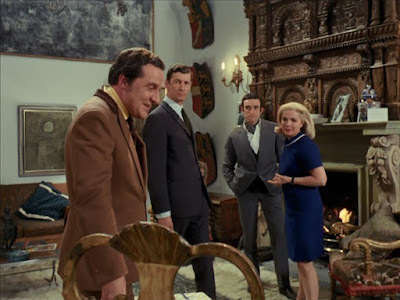 This was very nearly another blog post about a film - or rather two films, as will become apparent. Instead I will drag myself back to the subject of this blog, write about the Avengers episode Take-Over and comment on the films which inspired this post at the end.
I know I say this about every Avengers episode but this is actually one of my favourites. I love it for its incongruence - I love the respectability of the baddies. I love the absolytelu chilling sweetness of Circe. I particularly love Tom Adams in his cold, calculating role.
This Avengers episode is also in my opinion a bit of an odd one out. Particularly once you get into series 6 you can watch The Avengers for the atmosphere of Avengerland. It can be seen as comfort viewing. Take-Over allows the viewer no respite. None. And it does it marvellously by creating an atmosphere of terror in a charming country house, which also manages to be wildly modernist at the same time. This is one of the ways in which this episode messes with the viewer's head. It starts off by establishing the baddies as solid respectable people by their Rolls Royce and vesture. It then overturns this impression by having them murder a man with a device in a lighter.
The scene is set outside the house with a view of its gracious frontage. Once inside a different impression is given. The traditional interior has been dramatically altered - not unusal for the time, of course. But the interior is given a certain cold quality by the nature of the light. The walls are all white and the light makes the setting cold. Despite Steed's warmth of feeling for the Bassetts, the feeling given is of coldness and aloofness, which I can only feel is intended to reflect itself into the viewer and create discomfort. To stop this post becoming unnecessarily repetitive, suffice it to say that the discomfort returns and is intensified at every twist of the plot, and that is much of the point of this episode. The usual Avengers unreality is given an incredible twist of horror in this episode.
Visually, naturally, this one is superlative. The set of the Bassetts' house is of course very effective and the artifacts they own are used to their best effect to create artistic camera angles. My one criticism of the visuals, which in fact I've just noticed through setting out to be critical, is that the exterior shots, interior shots and one scene of Steed supposedly driving, don't cut together that well, and look too different. But that is merely a criticism of the technology of the time. Normally familiar faces drive me up the wall, but in this one I don't object at all, because all of the actors are playing strong roles and you don't notice who they are.
Tom Adams is particularly strong as the fantasically-named Fenton Grenville, the leader of the baddies. Chillling, I think is the word. He plays the role completely straight and matter of fact.
Two points which aren't really criticisms. I like to notice the props used in The Avengers because obviously the same ones were used and they tend to reappear. For example in this one the seat from Mrs Peel's series 5 flat reappears in the Bassetts' living room - you can just see it at the back of the picture. A statue of a pope which appears in Game also appears in their living room. Just saying - I'm not implying that they owned a props business! The other one is that the character of Circe Bishop is so frankly odd that if you're annoyed by that sort of person you could be put off this episode by her.
Best Steed quote in this piece: I haven't seen a room clear so quickly since Freddie Firman took a live skunk into the Turkih baths. 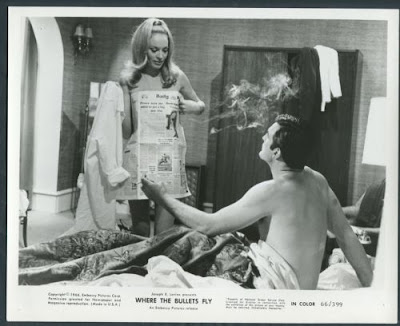 Tom Adams stars in a quite different role in the two spoof-spy films which I have been watching this week and which I almost wrote about here. The first is Licensed to Kill and the second is Where Bullets fly. He plays the country's second-best secret agent after Bond, and that is the point of the spoof. I have been wanting to watch those films for ages after repeatedly seeing stills from them on the internet and finally found someone selling a single copy for a reasonable price on eBay. Licensed to Kill is the first and the better of the two, in my opinion. It feels better made and the joke is new. The music alone is a dead groovy sixties nostalgia-fest. Similar to my last post (click the right pointing arrow at the bottom of the page to see it if it doesn't appear as you scroll down), these are films which I think will appeal to the lovers of the TV shows of the age. My only warning would be that you will be horrified by a) the prices people charge for them and b) the reviews of the quality of these discs. Sadly until they get a commercial release copies by small media firms are the only way to get them. One of the reviewers on Amazon said that the films were the worst viewing quality he had ever seen. I don't agree with that, and think the viewers of classic TV will be better-able to deal with them. My own copy was distributed by 'Onyz Media International' (no address given), is PAL format, and the disc claims that they are digitally restored. I am sure they are rather restored, however the picture quality is nowhere near what you would get from a commercial restoration. It's not the worst I've seen, but it's not brilliant. I am just happy finally to have a copy of these films, and think you will probably like them too.
60s TV The Avengers