The Professionals: The Rack 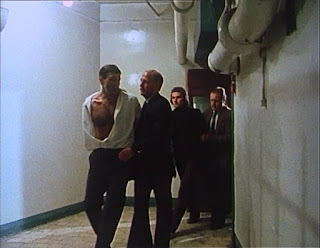 I ventured over the sea to the US in my last post (and thank you to Mitchell Hadley for commenting on this and bringing it to the attention of the TV blogosphere) so of course I've come scurrying back to Blighty this time. The Professionals is a show which I have tended not to write about here, despite it being one of my favourites. For a start I remember watching it with my dad, which is enough reason for it to be favourite, and it is also redolent of the clothes, cars and life of my childhood. It seems like it does have a cult following on the internet - the following just doesn't seem to have passed over into the cult TV blogosphere.
I have a theory about its (relative) lack of popularity. Much 1970s TV suffers from being made in the 1970s. The times were awful. The fashions were laughable. The social mores of the time were ridiculous (many a time Bodie and Doyle begin a conversation with a woman with the words 'Look, love...'). As just one example, the four CI5 cars which take the personnel to their sting are all Fords. The only decent one is a Mark 1 Capri. My godmother's husband had one of those - it was a sexy car when it was going but tended to spend more time off the road than it did on it. If you look closely at the trousers in this one, everyone seems to be wearing ones which, if not actual flares, are rather flared.
Most important of all, another aspect of this show which places it firmly in the 1970s - allegations of police brutality - are a hallmark of 1970s detective/police shows. Do I even need to mention The Sweeney? The sense of discomfort that 1970s policing brings to any British person at this length of time is exactly the sense of discomfort this show instils in the viewer. The arrests at the beginning of this episode are based on one single tip-off, and it is interesting that Cowley says, 'We haven't found anything yet, but we will.' He just knows that these men are guilty already. This kind of thing is in my opinion the reason these shows get less attention - it's too close to the bone. We all know that in the 1970s our police had a habit of randomly arresting people they didn't like. If anyone's unaware of the history, a google search will show a real life example in the imprisonment of the Birmingham Six. The kind of questioning associated with the police of the age is very much what is alleged to have happened in this case.
And yet, in TV terms, The Professionals attracted some really big names. The subject who illustrates this post is actually none other than the actor Michael Billington who played in a Bond film once and screen tested as Bond numerous times. He will also be familiar to readers from the Gerry Anderson show UFO and several other films and TV shows. In the manner of the time, the chest hair as it is here, was frequently on show - and frankly how much hair can one man carry? Here he does a wonderful performance as the frankly deranged Coogan.
There is a painful question at the heart of this episode. How far is it OK to go when we 'know' we are right? It is made even more uncomfortable by the fact that both sides are not exactly playing according to the rules. Coogan Junior dies after being hit by Doyle - the fact that it was severely provoked is much of the point. The Coogans' solicitor is obviously corrupt. What is actually coming under the spotlight here - as if made clear when CI5 is described as part of the government - is the establishment and the fact it makes up its own rules. As do the baddies it patrols. This is not a recipe which inclines to easy viewing. Watching The Rack is hard work, and both sides are actually on the rack at various times in the show.
The uncomfortable premise of this episode is unfortunately also the cause of its shortcomings. Once there is a death it is very apparent how the episode is going to proceeed. With both sides operating 'outside the law' we are obviously in for an uncomfortable view, and given that this is episode three of series two we only have to look in next week's Radio Times to know that CI5 will come out OK. We just know that the Coogans are the baddies and there is a sense in which most of this episode is just stretching out the premise to the obvious end. The rather slick ending is another common criticism.
Visually this episode is superb. Settings and acting are all wonderful, and I literally cannot criticise it production-wise at all, and that isn't something I often say about a show. The dialogue sparkles, it is wonderful. My favourite line is when Cowley says to Miss Mather that if she wants a seat she could sit on her knee.
To summarise - this is a show which encapsulates the uncomfortable world of the 1970s which can make it uncomfortable viewing. It is superbly produced despite being let down by a frankly rather obvious ending, which Bodie just happens to guess during a car journey. Nonetheless superb viewing and a very good example of The Professionals.