The Avengers: The Positive-Negative Man

on December 03, 2017
How have I managed to get this far without writing about this Avengers episode? Perhaps I had better start by disclosing that I have a ridiculous bias and this Avengers is one of my favourites. In fact I think it may even encapsulate best the Avengers thing for me. The whole episode is set firmly in Avengerland for a start. This of course was necessary because some of the more pantomimic elements of the plot would be incredible if seen against the real world of the 1960s. I say pantomimic because while there are times when the subject matter of this programme is treated very seriously, and would even be very distressing if the events of this episode happened in reality, they are treated in a way which can hardly be taken seriously. For example the opening shots of the man who hits the wall so hard it leaves his imprint in the plaster. The scene is as if a comic strip has come to life: the man dies and yet we see it. It is like the scenes in a Tom and Jerry cartoon where Tom gets hit on the head with a frying pan or something: it is a deadly thing to happen but is entertaining because of the way it is treated. I love the way Avengerland is seen in this episode as rather different from how it normally looks. The contrast from the usual tidy caricature of Britain is provided by the untidy and derelict Risely Dale research station. The location used for this was the British Rail centre in Watford, which by this time managed to look so bad because it had been used as a railway centre in the Second World War. Risely Dale manages not to intrude the real world of dereliction and the post-industrial lanscape so common at this time, by still conforming to the premises of Avengerland. It isn't quite real, it isn't really populated, and of course there is a red telephone box just outside the fence which still functions and allows Mankin to call Steed. 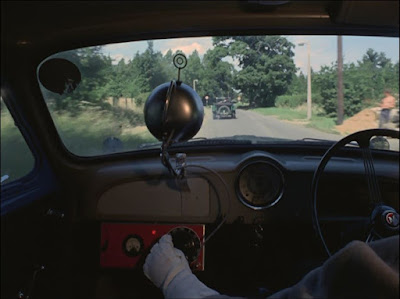 I equally love Cynthia,  the Ministry private secretary, whose ultimate ambition is to be a Button Lip - exactly the sort of character who populates Avengerland and of course she provides a sex interest for Steed when she reveals she has lots of keys hidden in her garter. Although I'm not a great one for intruding real sex into the world of the Avengers - regular readers will know that I prefer to think that it is more implied in the later series - I do like to think that Steed would have, er, got to know her better. If only because she was so impresed when he produced his red card. I even love the holes punched in the red card, indicating that it was a part of the red hot security technology of the time and would have had to be fed into a Computer. In true flippant Steed style, he wonderfully spoils the good impression his red card has made on her, when she tells him that all the confidential war records are kept where they are, by asking her if there have been many confidential wars!
There is more of The Avengers's usual understated sexiness in Mrs Peel's corny jokes with Hayworth and the sexual language he uses when he goes to her apartment to trap her. And of course we have a scene of Mrs Peel tied up and yet still rebutting the power the men have over her. There is a very real way in which this encapsulates the sexual dynamic of The Avengers. Steed as the dirty old man, and Mrs Peel as the apparent sex object who is still in charge really. 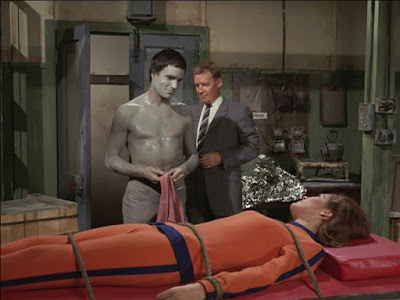 You will no doubt notice that I'm not really commenting on the plot here at all. Another of the things I like best about this episode is the utterly improbable plot. It reflects very badly on The Ministry that they have stopped research on something which we can see happening in front of our own eyes on the telly. I think the reason I'm not talking so much about the plot is simply that what I like best about this episode is the Avengerland atmosphere of it. Without this being an episode of The Avengers, I suppose the plot would be a rather creaky sci-fi film. Add in a few diabolical masterminds and it becomes an eccentric confection of weirdness and escapism. The plot is in fact one of the weaknesses of this episode, and in fact is a major area of criticism in other people's reviews of this episode.
With great difficulty I have found something to criticise in this show. There is a scene about half way through where Steed is being chased by the blue Morris Minor van of death. Unfortunately there is a bit where they pass some builders by the side of the road, and one of them turns round to stare at a vintage Bentley speeding past them. It is unfortunate that this is the only occasion (that I am aware of) where we see the reaction of the modern world of the 1960s to the world of The Avengers when they come face to face with it. Of course the reaction implies that the man was seeing something very unusual - exactly the reason the Avengers usually avoided any real world situations. Incidentall I wonder if Mrs Peel would have approved of his pectorals, since she judged Hayworth's far from perfect and certainly wouldn't have anything good to say about mine.
Overall I am quite surprised that this episode doesn't get rave reviews from the fans. My own opinion is that while it has a rather weak plot, that doesn't matter because the point of this one is the Avemgers-ness of it.
60s TV The Avengers