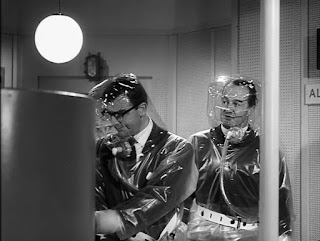 Before The Avengers. The Avengers. After The Avengers. That is largely my own description of the landscape of 1960s British TV. Regular readers will of course know that I see The Avengers as a high point, and everything else is rather an anticlimax, or under the show's influence, or imitating it. It is for this reason that I tend not to venture into the world before The Avengers very often (except in film terms - most of the films I watch are pre-Avengers). Ghost Squad is thus a rare departure for me - although still bang up my street because it is still an ITC show, which studio produced the majority of the rest of my favourite viewing.
Ghost Squad was never really going to appear here, until I came across the box set in a charity shop in Stratford upon Avon this week and took that as the universe's message to me. I'd read about it, of course and it tends to come up in my recommendations on Amazon, but I'd never really taken a fancy to it. I'm trying to put my finger on why, because actually I don't think think it is that different in scope to most other ITC shows - adventure, espionage, the classic formula.
What decided me that I had to write about this particular episode here was the scene in the nuclear reactor. Of course here we are revisiting the theme so common to Atomic Age TV, that technology is wonderful and dangerous at the same time. I can even more specifically describe what decided me to write about this episode - it was the safety costumes worn by the workers and visitors in the nuclear reactor. They look like inflated plastic bags, cut to the workers' size. I wondered how the actors breathed through these suits, although they are clearly inflated so there is obviously air in them. I also wondered how they stopped the suits steaming up from the actors' breath - such are the peripheral things I tend to think about when I watch TV. As usual I also wondered what wearing one of those suits would feel like, and came to the conclusion that it wouldn't be much fun.
Otherwise the nuclear reactor's security is the key to that part of the show, and this episode is very much a classic tale of east-west espionage in the Cold War. The Other Side are after our nuclear secrets and the Ghost Squad is responsible for recapturing the vanished radioactive material. Again this is a plot which is familiar from other shows of this age - I'm sure either Department S or possibly The Champions have an episode with a very similar plot. It is the fear of technology being misused by diabolical masterminds, which we find in a an 'unreal' sense in The Avengers, here writ large and very much in the real world.
Except it isn't the real world as we know it in 2017. This is very obviously a different world. The up to date technology looks marvellous outdated. All the men wear suits. The cars are wonderful. There is a maker of ballet shoes who makes them by hand and all his customers have their own lasts. Does that happen nowadays? I have absolutely no idea, naturally. The ballet slippers are the rather obvious clue as to what has happened to the purloined radioactive material. Well before the Polish Pope, Chernobyl, and Perestroika, this show really does depict a different Europe, one divided down the middle. It is easy to forget how the other side of the iron curtain was seen before things opened up, and this show rather brings it back. I had forgotten how the arts - here ballet - were one of few things which passed over the iron curtain, for example. And no doubt at the time, this show would have seemed bang up to date, with such things as a message being received on an airoplane. The sophisticated setting is further enhanced by the high class worlds of science and ballet in which this episode takes place.
The predictability of the conclusion is of course a plot weakness in this show. Once the Ghost Squad visit the ballet shoe maker's shop it is fairly obvious what will happen. While this is portrayed as a dangerous and risky mission - it is very obvious what will happen. It is a personal opinion but of course I'm not keen on the familiar actors who appear in a number of shows, who make an appearance here. The point is to watch the show, not to think about where you have seen the actors before. As I say, this is a personal dislike and other people won't dislike it.
Otherwise Ghost Squad is very much of its era, production-wise. I particularly like the way the studio shots of the ballet taking place on the 'stage' cut to stock shots of a huge audience. We notice the difference in film quality starkly now: I still can't work out whether people would even have noticed at the time, or just accepted it as the technology of the time. I like the restoration that's been done on this show enormously - the picture is crisp throughtout and the sound perfect. I have a suspicion that the available episodes in the Network box set may not be the whole of the original run, but the're still a good taste of what this show would have been like.
60s TV Ghost Squad