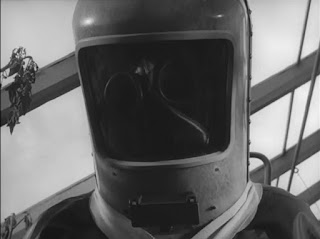 Back to one of the classic themes for TV in the 1960s for this episode of Danger Man - namely the danger inherent in our modern technology if it is not handled correctly. In fact I love the way this show starts: the sequence showing the children trespassing in the virus research establishment is very effective and suggests right at the start that the doubtless deadly viri being researched in the establishment are not being looked after properly. Of course in this case there are potentially deadly consequences.
It is strange but I have repeatedly watched all of the episodes of Danger Man (although not recently) and had no recollection of the amount of what we might call spy technology used in the show. Once again the ambivalent 1960s attitude to technology where it can both be our saviour and destroyer if it gets into the wrong hands. In this episode the spy technology used by Drake is a bug which he fires from an umbrella and which attaches itself to the lintel of a room opposite. This coupled with a typewriter as the other end of the communications device means equipment truly worthy of Get Smart!
Ultimately the theme of this episode is the individual human as the arbiter of what knowledge and technology are used for. Just one scientist is the holder of the secret which gives the episode its title and which could be used as a weapon, if it fell into the wrong hands...or even if he was subjected to enough pressure. Would it be right to control this individual human, and so prevent him popping across the channel and risk his secret falling into foreign hands? Or is it better that he retain his liberty and 'we' (obviously in television 'we' are always the goodies) run the risk that one scientist's knowledge could be used as a weapon, possibly against 'us'? The ethical question hidden behind this one is whether it would be better to restrict research into viri because the research could be used to make weapons, or better to facilitate the research because of its potential benefits. The solution to the quandary this show presents is the very 1960s TV one that there are a lot of very evil people in the world and while we must allow good people their freedom, including freedom to make mistakes, there must be secret agents to protect vulnerable scientists from preying foreigners. It's all very Avengers.
The episode is filmed in a way which is effective and carries the heavyweight ethical issues underlying it in a way which stops it being turgid. It is effective that so much of the episode takes place in a French holiday town, and there is a repeated scene of men playing cards in the lobby of the hotel. Of course this could be an image of the heavy layers of decision and chance which are playing out in the plot - if you want to get all symbolic about it, but it puts the viewer in a relaxed mindset, providing an effective background to Drake's problem. It is also an episode which doesn't put a foot wrong. Every scene is effective, every conversation contains tantalising hints of what is going on, you wouldn't doubt that it was actually filmed in France, so sure-footed is it. I particularly love the old Citroen DS cars.
Criticism...criticism... I'm afraid I don't seem to be able to think of any cogent criticisms of this episode! It's not often I can say that about a TV show, but I will here, and I think that is what puts this one in my coveted category of Stonking Good Television.
60s TV Danger Man