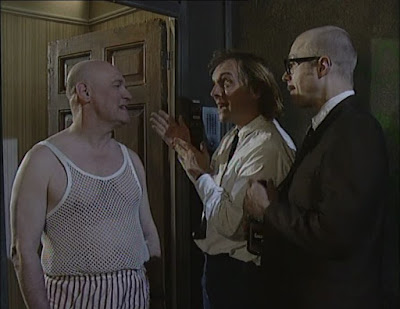 A few posts ago I said that I would try to concentrate more on blogging about single episodes of quality shows. And thus we come to Bottom, which I don't think I've written about here before, although it is one of my favourite shows ever. Coming out of the alternative comedy scene of the 1980s, it isn't really comparable to the Goodies, and yet I do think there is a slight comparison in the theme of down-at-heel 'friends' who end up stuck together for better or worse. The difference is in the tone of course - the friends in Bottom are really mortal enemies who have a bizarre codependency going on, while the friends in the Goodies are really friends who club together to do anything in a time of need. I feel it is significant that one is pre- and the other is post-Thatcher's Britain.
My favourite scene in this Bottom episode is the card game with which it opens. It is obvious that this kind of card game has frequently been replayed in this house, and also that the cheating has been the same every game. I love that the deck has been reduced to twelse cards and that Eddie knows all of Richard's little cheats. He still trumps them by winning with five kings of course - and Richard fails to notice that Eddie is therefore also cheating!
Cheating is a sort of theme running through this episode and in fact through all three series of Bottom. We see how the gas appliances in the flat are all going at full whack and how Richard and Eddie have rigged the meter to show no use of gas at all. The plan looks as if it might be going wrong when the gas man comes to the door to read the meter. I love his reaction to Richard's hysterical shouting of 'Gas man! Gas man! Gas man!' - 'Do you have someone who looks after you?'!
Bottom is another of those shows which depend on a lot of visual gags for their effectiveness. There is a very real sense in which the acting is way overdone for comic effect. Take for example, Eddie creeping up on the gas man with a cricket bat and going to hit him, until he looks round. Like everything else in Bottom, the violence for which the series is well known is also overdone for effect, and that is why it is funny. This places Bottom in a great comedy tradition, of which pantomime and cartoons such as Tom and Jerry are also part, where terrible things happen to people, but because they are not real they are hilarious. It also draws on the tradition of Tony Hancock's eternally put-upon and failing through no fault of his own hero: Richard's explanation to the gas man of how they heat up the water for tea without using gas, is worthy of Hancock at his best.
The inventiveness is also worthy of Hancock, just with a surreal element the lad himself would never have thought of. They first think of getting rid of the dead gasman's body by eating it, then offering it to kebab shop, then throwing it out of the window onto the roof of a bus! Similarly the plan to break into Mr Rottweiler's house via a very creaky pipe is so clearly doomed it is bound to be hilarious. The next plan, of making a little hole in the wall and replacing the bricks so that he won't notice, is even more ridiculous. In true Hancock style, their plan is derailed by the distraction of a real woman naked, and the contents of a fridge that they won't have to pay for, in addition to the obvious disaster of a huge gas flame which can't be put out.
The boys are of course stealing their gas off Mr Rottweiler, the man next door, ably played by former wrestler Brian Glover. He is the embodiment of adult sexuality who is the counterpoint to Eddie and Richard's rather adolescent fantasising about sex. Who else would even consider finding out what snogging is really like by giving the kiss of life to a dead gas man? In this Bottom steals another comedy convention, of the protagonist's jealousy of another person's life and experience. The point is of course that we have all been there, but we can laugh at this because if we are still at the stage of wondering what sex is like we can pretend we are not, and if we know what sex is like we recognise Richard and Eddie's state in our outgrown youth and can laugh at how ridiculous we were. We can also be very happy that we don't have to resort to quite such ridiculous plans - in a cruel twist of fate, as Eddie and Richard try to escape Mr Rottweiler's house they walk straight into the gas man they have already killed once, who is ringing the door bell.
Bottom is a great show which draws on many of the classic comedy conventions and gives them a 1990s spin. It is probably also guaranteed to offend your maiden aunt, which can only be good.
90s TV The Comic Strip Presents & Others