Department S: The Soup of the Day 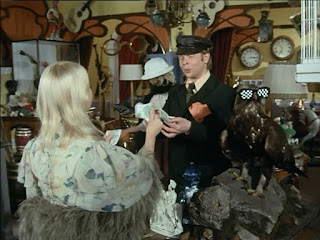 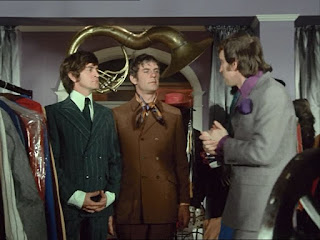 My recent watching of Get Smart and the comments on the contemporary craze for all things to do with spies has caused my mind to turn towards Department S. This is an over-generalisation, of course, but it may be significant that as the sixties wore on and in the US the spy-craze turned more towards parody, in the UK it just turned bizarre. I'm thinking of all the ITC shows, distantly related to spycraft and espionage, whose characters became more and more flamboyant, peaking in Jason King. In the midst of the Cold War the actual espionage remained a serious matter and those who did it became the subject of the TV shows. I'm quite prepared for this little thought of mine to be blown out of the water, of course.
This Department S episode is one which is a very good example of why I dislike familiar actors reappearing in all sorts of shows. Right at the beginning we see Patrick Mower appearing as a baddy. A few years later he was appearing as a goodie in Special Branch. Of course they wouldn't have been seen together but I'm finding it a little difficult to think of a TV show of the time in which Patrick Mower didn't appear and was always obviously himself. Naturally the two shows are not quite contemporary, and I'm also not keen on actors being typecast, but when you're living on a diet of the TV that remains form the sixties and seventies it can be a bit confusing.
One of the things I like most about this one is that it starts off by showing the reality of multicultural background of Britain of the time, with its scene in Chinatown. None of the pretend Britain of The Avengers - Department S is set in the sophisticated, cosmopolitan world of the 1960s, and so must have been as aspirational as any other TV show could be. Sir Curtis is of course not only black but is also a knight and has the sort of accent which can only indicate an Oxbridge education, so the show really does show the sort of sophisticated mixing that was frequently a few decades in coming in the real world. So Soup of the Day has an element of unreality, which reflects that despite the show's cosmopolitan aspirations, this episode is very much set against the unreal background of Swinging London, demonstrated best in the kind of interiors we see (pictured), and even more in the sudden change of scene to the Portobello Road stresses that this episode is set in Swinging London. When the empty crate of fish soup is found, the music changes further to stress the Swinging nature of the set-up, before moving to the cosmopolitan setting of Lisbon. There is just a suggestion here, so common in the TV of the time, that the age was going wrong, and the latest trends were actually the instruments of Our Enemies.
As a mystery this one is unfortunately handicapped by a huge error of plotting. It is very obvious very early in the show that the soup is only a red herring and the point of the heist is the radios. The fact that we know that means we just watch Department S being mystified. Since the soup was dumped and there was nothing unusual about it, it was always going to be obvious that the soup was not the point. This episode gives the game away far too early. It is also apparent that the baddies are not at the top of their field because they've managed to draw attention to themselves. A further weakness is that the plot can be very difficult to follow.
That said this episode has many high points. I love the curio shop run by the two girls to whom Jeremy seels a radio. As a purveyor of the sort of kit you would want if you were furnishing your home as an outpost of Avengersland it is a delight. In fact it could serve as a textbook for how to furnish your home in the style of Swinging London. Another high point is Jason King's abortive attempt to chat up the secretary at the soup exporter's - which is ruined by her insistence on bringing her mother along as a chaperone, so that King is forced to say that he would also bring his own mother as a chaperone. King falls at the first hurdle, for a change, but the secretary overcomes this difficulty! The boutique selling military clothes is another high point. In fact this show is something of a compendium of the suppliers to the in crowd in Swinging London.
Despite being largely studio-bound this show doesn't stint on the props. One of the smaller ones is the transistor radio, which in its leather case reminds me of a cassette player my mother had in the seventies, and I remember it being fascinating that it had its own leather case. Her explanation for that was that it was 'portable'. The other prop I love is the huge American car used by the baddies in Lisbon. There is a scene where you see the door open and the thickness of the wall of that car is quite something.
So in conclusion, despite the plotting defects of this one, it is a wonderfully atmospheric view for the fans of 1960s TV or of the 1960s in any way.