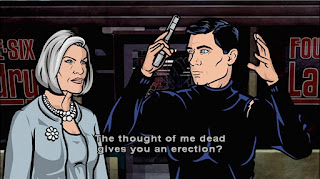 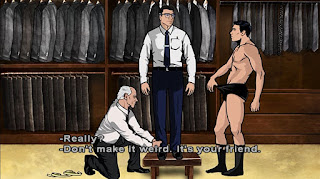 All things espionage. That has recently been the subject of this blog, because that was the fashion in the 1960s, when so much of the TV I like was made. The spy thing, of course, is paradied in so many of these TV shows: I might mention Man from UNCLE in addition to Get Smart, which I have recently rediscovered.
But none of those parodies parodies the world of espionage as effectively as Archer, which I have only just discovered. My only regret at having discovered it so late is a rage at a cruel world that I have somehow managed not to hear about the show up until now. How could that have happened? I can only conclude that the universe produces another TV show for me to watch when I conclude there isn't enything left.
Archer parodies the inner world of the spy. The real world of the spy. The world of the spy where you actually work in an organisation with HR and all the other paraphernalia of the modern workplace. Add the twist that his boss is his own mother and you have the makings of a farce. It is a sign of the quality of this show that it manages to parody clueless secret agents working for a chaotic organisation, without losing interest and while remaining intelligent. At the time of writing I am half way through the first series so obviously can't speak for whether the show keeps up this level of interest in future series, but merely avoiding becoming repetitive for the episodes I have watched so far, is a considerable achievement.
Archer himself is hopeless. There is a wonderful scene where we see a secret agent's cover blown because Archer has rung him on his mobile asking him to confirm that they work for Isis, for some girls in a bar. The point is that all the ethnically diverse agents of Isis have been lost, and we are privileged to see that Archer has done the same thing over and again. This premise of a secret agent who is hopeless is not normally one that would appeal to me but Archer pulls it off with aplomb and style.
That said, the sense of humour is probably a bit adult for a lot of people. Nonetheless Archer's anarchic, sexy humour appeals to me personally, and here in the UK the show only has a 15 certificate which indicates that the British Board of Film Classification doesn't consider it *that* shocking. Of course the point is that the whole show is a parody of the sexiness of the secret agent, perhaps best personified by Mr Bond.
I particularly like the mother. I love the way she has swapped over all the medicines in the medicine cabinet to confuse the servants. And I really love the way she rings a bell for the caterers to bring in the soup at a dinner party. It is the same bell she kept on her bedside table to wake the nanny when Archer wet the bed as a child; a fact she doesn't hesitate to tell the guests.
Archer is a show which has made me laugh out loud. And if you like to see the spy genre parodied, I would highly recommend it to you.