Hancock's Half Hour: The Cold 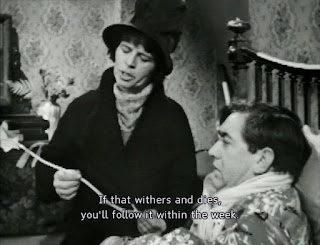 I was very chuffed at the way my last-but-one post kicked off a conversation mainly about British comedians and the difficulty we have exporting them elsewhere. Dominic Bird made the pertinent comment that the only humour anything like ours is Russia's and that it must rain a lot there. Which brings me nicely to the subject of this blog post - Hancock has a cold. In addition to the weather, colds are a British preoccupation. The rumours are true that there used to be a place which researched treatments for the cold, and people would go there on holiday to be given a cold and experimented on.
It is only a nation which could support that kind of official centre which could also produce the sort of humour we have in this episode. When you say it, it sounds strange: the object of humour here is a man's illness. Oh dear, how can I live with myself?
The joke is, of course, in Hancock's approach to his cold. The rest of us may go to bed for a couple of days if it's bad enough, but he's invested in every quack remedy going, including even Mrs Cravat's witchcraft! Hancock is taking exactly the same brave-hero-who-is-really-being-rather-hopeless approach he does to everything else, including dating in the last episode I wrote about. We all know that nothing he does is going to help at all. On the other hand we all know that in private we have all fallen for these quack remedies ourselves, although naturlaly we wouldn't tell anyone. Hancock, however, gives us the opportunity to laugh and feel superior about somebody's irrational faith in quack remedies, secure in the knowledge that ours will never be in the public domain. And needless to say Hancock's little peroration on how wonderful he is, is to say how superior his nose is to Sid's.
The ridiculousness is shared by Sid James. I love the way he wears a face mask and sprays an aerosol every time Hancock coughs. And Sid's ridiculousness is counterpointed by Hancock developing full-blown flu, and then taken to extremes by Mrs Cravat. The point is that Hancock is behaving like we all do with a cold, as if we're going to die, and nobody believes in any of the mumbo-jumbo he's invoking to sort it.
There is an episode of Hancock's radio show where he also resorts to magical practices as a result of being required to perform on Friday the 13th - only in that case Sid screws him for all he's got with a fraudulent druid order. Again, it is extraordinary the way Hancock's humour relies on situations where humans actually have no power and have to resort to superstition - in this case he goes to see a proper doctor who has a cold himself and naturally has no treatment for it.
I suppose the underlying characteristic of this humour is that it takes the things we all do but are ashamed of, laughs at them, and puts them on the TV for all of us to laugh at. The marvel, the wonder, the raw talent, is to get a whole half hour out of this and to remain funny, a funniness which remains after repeated viewings. Galton and Simpson were comedy genii.
60s TV Tony Hancock