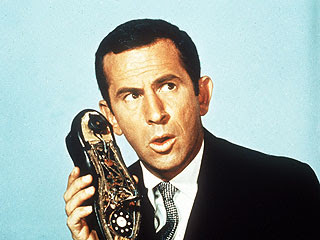 I had forgotten about this show, when I came across the bosed set in the HMV shop just round the corner, and the face of Maxwell Smart brought back memories. It is not surprising that I had forgotten it, because I can't remember reading about this show on the cult TV blogosphere ever. It is also not one mentioned in the books. Which is odd, considering it is very much out of the same world which gave birth to so many of the shows I write about here - The Avengers, Danger Man, and, especially, The Man from UNCLE. Nonethless I must have watched this show before, because I remember it. I have been unable to find UK broadcast dates, but suspect that I was very young, but suspect that it was around the same time that I was a huge fan of Mission Impossible and The Man from UNCLE, and as I remember my younger self loved Get Max equally.
I have a feeling that this show's lack of presence in the TV blogosphere (as surfed my me, that is) is because it is a relative lightweight in comparison to the shows it spoofs. I'm also not at all clear how popular it was at the time or now: there is a website which has obviously been going for years, which includes a plot summary of every episode and a list of merchandise, which usually indicates a really cult TV show. I am therefore at a loss as to why I haven't read about it in the 35-ish years since I last watched it and have had to seek out the information on the internet. I don't want to assume the programme was unpopular (because it got into several series and remakes, etc) but would hypothesise that it may be one of those shows which is neither one thing or the other - I'm particularly thinking of how the introduction of more humorous elements into the third series of The Man from UNCLE alienated the viewers). If you're looking for a comedy, it is just what you want, but its apeing of the spy genre of the time may not have been that popular at the time, and the reason for that unpopularity may simply be that the spy genre was so popular that apeing it was not acceptable. As I say this is a theory and not one I would go the stake for.
It pleases me to announce that Get Smart manages to include every convention of the spy genre of the time. I particularly like the opening sequence, with the convention of the hidden headquarters. It is of course in the nature of the show that all of these conventions are overdone - particularly the gadgets. I love the sheer ridiculousness of so many of the gadgets. Of course this is another thing which may make this show simply too much for some viewers to find funny.
I also particularly like the character of Maxwell Smart. He is a sort of anti-hero to the hero figures of so many of these shows. Bond never drops anything, and with ridiculous nonchalance brings the case to a conclusion, with time to seduce several women along the way. The men from UNCLE work rather harder and of course have differing approaches to the opposite sex, but nonetheless nothing really goes wrong as such. Do these people really never drop anything or walk into a door? I now realise why - it is because all of the accidents have been soaked up by Maxwell Smart on their behalf and so the probability of Bond falling over as he is taking off his socks is minimal. Smart actually fulfills a function in our society, therefore. To put it another way, he is a secret agent who is more like us than the ones in films and TV. In fact he is so like us that he has had to be given this air of ridiculousness so that we always have the luxury of looking at him and thinking he is more accident-prone than we could ever be. Get Smart is therefore the ultimate comfort viewing.
Nor does Smart actually have a sex life, which places him apart from most secret agents (and ensures that my region 2 set of the first series has a PG, or G in Ireland, rating). He would like one, and is surrounded by beautiful women, but I at least feel slightly relieved for these women because we all know that if he got anywhere with them something terrible would happen. His female colleague, 99, remains firmly in the background in a rather unreconstructed way, in common with the series of the time.
So apart from the humour the conventions of the spy genre are actually all present and correct. We have an evil organisation bent on world domination. The men wear suits. The show is wonderfully redolent of the 1960s - I think if you like the sort of ITC shows I have written about here, if you can cope with the humour, you will like Get Smart. The episodes look and feel very much like...well, like Uncle or any ITC series. They are very much studio-bound, which makes for a very controlled and good quality picture, which has also been restored wonderfully. The only thing I don't like about it - although it is in accord with the US TV of the time - is the canned laughter track.
It is not an accolade I think I have given at all recently, but Get Smart definitely gets my rating of Stonking Good Television