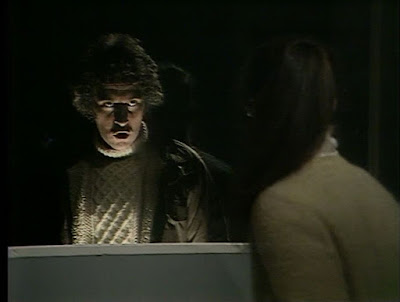 If nothing else the phenomenal nature of Crane's psychic abilities come to the fore in this episode. That is what makes The Omega Factor great television - it quite rightly exploits this ability to great effect.
What particularly interests me in this episode is the way the parapsychology of the time is showcased very clearly. By the time the X-Files were being made twenty years later, while obviously the skills were the same, there is a lack of the sort of 'science' exhibited in this episode. Many of this science's aspects will be familiar to viewers of the TV of the 1960s and 1970s. The cards used to show psychic ability in The Prisoner, for a start. I particularly like the investigation of the house: it reminds me of nothing more than the opening scenes of the Sapphire and Steel adventure set in the railway station, in which the ghost hunter is setting up his equipment. A technology used in both Sapphire and Steel and here is that of recording the environment and seeing what is picked up: I remember trying this one in our house when I was a child and never getting anything. Having heard some of these recordings I would have to say that I personally am sceptical of this area of parapsychology: many of the recordings require great imagination to understand and certainly you never get the host of voices you do in this one.
The incredible phenomena are used to great effect to make this episode genuinely terrifying. Crane becomes the subject of something way beyond his own understanding here - not only his psychic ability but also the battle he has unwittingly started with Drexel, and the bereavement he has experienced, which is clearly a major driver to him in this episode. He is both the protagonist of the story, since he is the psychic whizz kid, and he is also the wounded hero figure, who has to go through a mourning process and also deal with the assaults of the man who is the cause of his bereavement. I would consider this a plot weakness of The Omega Factor: not that Crane has to carry the whole show as the hero-victim figure (I actually don't know how this series ends, but I have read that it is an ambivalent ending without much in the way of a resolution), but that there is something wrong with the way his abilities are portrayed. It would be inconceivable that a grown man with Crane's superlative psychic abilities would never have been bothered by them before the age of thirtyish.
This episode pulls out all the graphics technology of the time to make the investigation of the house really effective. I particularly love the way we see the food visibly turn mouldy in front of us. I love the paraphernalia of psychic investigation of the time, and the way that the investigation is still framed as an empirical scientific investigation, while at the same time Department 7 has taken on a man of incredible psychic abilities and thus made sure that the investigation will ultimately be completely uncontrollable!
Of course television drama has the great advantage over scientific research, that it will never be required to produce actual evidence for what it shows, and that is why a parapsychology investigation is such a good subject for TV drama. The Omega Factor also has the advantage of being fictional, over such later shows as Most Haunted, which have the great disadvantage that most parapsychology investigation will always be dead boring, and so the antics of the crew become the major entertainment. Of course this isn't an issue in an investigation which is purely for dramatic purposes: the crew can roll around on the floor and foam at the mouth to their heart's content.
Oh - and the other thing that is clear here is that Department 7 are going to have difficulty looking after Crane and his abilities. Yes, that's right, just as is the case in The X-Files.
70s TV The Omega Factor