The Omega Factor: After Image 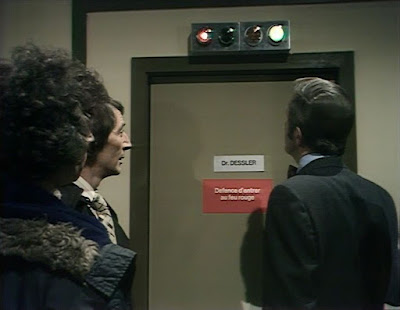 Let me come clean. I wasn't going to blog about this episode at all. I put it on and it just didn't grab me: in fact I didn't really understand what was happening with it. I was eager to move on quickly to the classic parapsychology of the following episode. But then that's one of the reasons I blog about these shows - to make me understand them better.
On deeper consideration I think this episode also takes us into the classic territory of cult TV. It's the sort of all-pwerful psychological medicine we see used so abusively in The Prisoner, and warned against so graphically in The Avengers. Looked at like that, this Omega Factor episode is in classic cult TV territory - the baddies have the ability and can misuse it to their will. Drexel's references to the way sensory deprivation is probably employed for pleasure in California, also indicate that these sorts of technology tend to be rather self-indulgent rather than of any use in the cutting edges of medicine, science and order.
Something I haven't commented on is how the setting of The Omega Factor brings back the age to a T. In this one we see a corridor train - I literally can't remember the last time I saw one of those. The collars tend to be pointy, the trousers flared and the cars of a sort which we don't see nowadays because they were rubbish then and have either been scrapped or are kept only by the most extreme fanatics now. There is also a recurring visual of some suffering soul sitting up in a hospital bed, so that we get to see a gallery of some of the more bizarre nightwear of the age - did people ever really sleep in those synthetic fibres? Didn't they get rashes?
In attempting to allow my generalised feelings of dislike for this episode, coalesce into a coherent reason to dislike it, I have come to the conclusion that the pace of this one is just wrong and there isn't enough to grab the attention. Even slower episodes of the show manage to provide interest and somehting to focus on, but this one is a little too academic - for example there is a lengthy explanation of how grief can make people experience strange things. Additionally this one is neither one thing nor the other - there is of course magic involved, but there is also a fairly standard mystery, and it's got a foot uncomfortably in each camp.
There is additionally something wrong with the psychic ability bit. Crane really should be able to tell that Dr Reynolds is in the hand of his magical enemy. In fact he should have some idea of what Drexel is doing, but doesn't seem to so far. Perhaps I'm being over-simplistic. He also doesn't notice that a Range Rover is very obviously following him. But perhaps I'm also being over-picky.
I'm also being unfair - it becomes apparent that this episode is a turning point in The Omega Factor. Of course at this point we are less than half way through the series so it is unlikely that Crane's enemy's fate will be the end of the story. It's like that with magic
70s TV The Omega Factor